Anthology Reading: TICK TOCK: ESSAYS ON BECOMING A PARENT AFTER 40 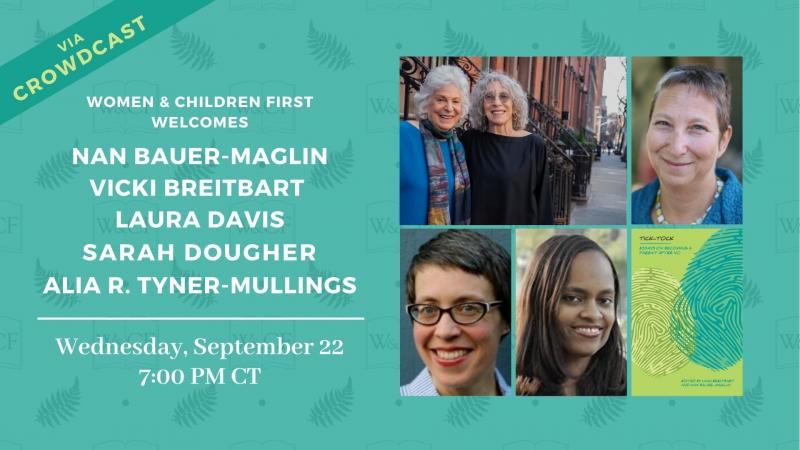 Join us on Women & Children First's Crowdcast Channel to celebrate the releast of Tick Tock: Essays on Becoming a Parent After 40. For this event, editors Vicki Breitbart and Nan Bauer-Maglin will be joined by Alia R. Tyner-Mullings, Sarah Dougher, and Laura Davis.

In Tick Tock: Essays on Becoming a Parent After 40, thirty writers offer insight into the unique experience of being or having an older parent in today's world. Writers, child development experts, and older parents themselves Vicki Breitbart and Nan Bauer-Maglin have curated a collection that affirms and destigmatizes the act of becoming a parent over 40, whether by choice or by chance.

Alia R. Tyner-Mullings is an associate professor of sociology at Stella and Charles Guttman Community College—CUNY. Her areas of interest are education, communities, and popular culture. She also runs workshops on academic planning.

Sarah Dougher is an educator, writer and musician from Portland, Oregon. Her current work focuses on strengthening the pathways for high school seniors into higher education, especially immigrant, first generation and other historically excluded students through her work as a professor at Portland State University. In addition to releasing 8 albums of music, she also helped found the Rock ’n’ Roll Camp for Girls, developed educational programs for unsheltered youth in the Portland area, and has written extensively about girls, music and social change in both popular and academic venues. She is currently working on a book of essays.

Laura Davis is a professor at Kennesaw State University, where she serves as the associate chair of the Interdisciplinary Studies Department. Her teaching and research interests include digital pedagogy, queer studies, intersections of gender and the US South, ecofeminism, and the literature of William Faulkner.

At the age of thirty-five, Nan Bauer-Maglin adopted a child from Colombia in 1977. Adoptive mother to one, stepmother to three, and grandmother to twelve, Nan’s latest book is Widows’ Words: Women Write on the Experience of Grief, The First Year, The Long Haul, and Everything In Between (Rutgers University Press, 2019). Dr. Bauer-Maglin worked at The City University of
New York for forty years, first as a Professor of English and then as Academic Director for a nontraditional baccalaureate program.

Vicki Breitbart has worked on sexual and reproductive justice for more than fifty years, as a program director, educator, researcher, and activist. Her writings on women’s health have been
published in several peer-reviewed journals. She has two adult children, one of whom she adopted at fifty-five, and two grandchildren.

Tick Tock: Essays on Becoming a Parent After 40 (Paperback)