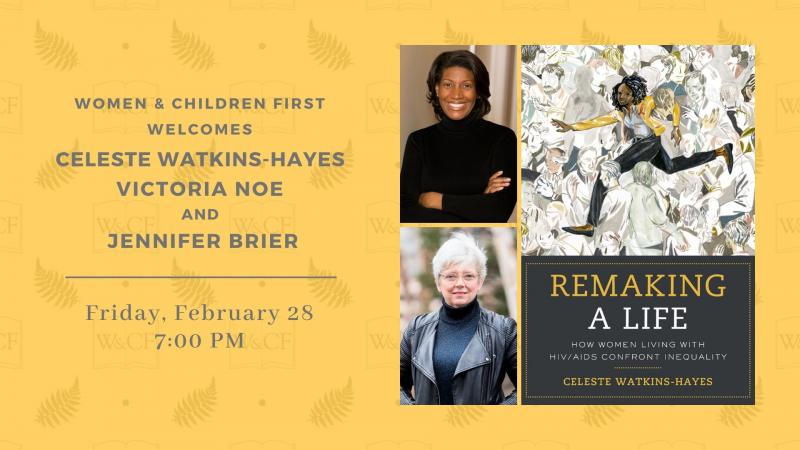 What is the legacy and ongoing work of women in the HIV/AIDS movement? In this provocative discussion, authors Celeste Watkins-Hayes and Victoria Noe will discuss their new books on women in the epidemic who fought to shape their destinies and capture the attention of policy makers, the HIV movement, and the public to influence hearts, minds, science, and policy. The discussion will be facilitated by AIDS historian Jennifer Brier, and we extend a special invitation to women living with HIV and those active in the movement to join us for this inspiring conversation.
Register HERE for this free event. Registration is encouraged but not required.
Celeste Watkins-Hayes is Professor of Sociology and African American Studies, and Faculty Fellow at the Institute for Policy Research at Northwestern University. Her most recent book, Remaking a Life: How Women Living with HIV/AIDS Confront Inequality, analyzes the transformation of the AIDS epidemic and is based on interviews with over 200 female AIDS activists, policy officials, advocates, and women living with HIV/AIDS who have been on the front lines of this fight. The book’s release has been covered by Ms. Magazine, EBONY, Chicago Public Radio, New York Public Radio, POZ Magazine, and Chicago Tonight.
Victoria Noe is, by her own admission, on her fourth career. She moved to Chicago in 1977 to work in the off-Loop theatre community as a stage manager, director, administrator and founding board member of the League of Chicago Theatres. In the late ‘80s she switched to fundraising in the AIDS and arts communities, followed by fifteen years as an award-winning educational sales rep. But when a concussion ended her sales career, she decided it was time to keep a promise to a dying friend: write a book about people grieving their friends. It became the award-winning Friend Grief series. That series brought her back to the HIV/AIDS community and the publication of her most recent book, Fag Hags, Divas and Moms: The Legacy of Straight Women in the AIDS Community. The book has been honored with a B.R.A.G. Medallion for excellence in indie publishing, and was a finalist for A&U Magazine’s 2019 Literature of the Year Award. Her articles have appeared on a variety of grief and writing blogs as well as Windy City Times, Chicago Tribune and Huffington Post. Her essay, “Long Term Survivor” won the 2015 Christopher Hewitt Award for Creative Nonfiction.
Jennifer Brier directs and is professor in the Program in Gender and Women’s Studies at UIC, and is also on the faculty in the History Department. She specializes in US sexuality and gender history as well as public history. Brier is the author of Infectious Ideas: U.S. Political Response to the AIDS Crisis. As a curator, Brier worked with Jill Austin to produce, Out in Chicago, the Chicago History Museum’s award winning exhibition on LGBT history. She also curated “Surviving and Thriving: AIDS, Politics and Culture,” a traveling exhibition for the National Library of Medicine. As of 2019, a bilingual version (Spanish and English) of the exhibition is beginning its tour around the country. Brier is at work on a major public history project called History Moves, a community-curated mobile gallery that will provide a space for Chicago-based community organizers and activists to share their histories with a wide audience. The current project, “I’m Still Surviving,” is a transmedia living women’s history of HIV/AIDS. She was named the 2018 UIC Distinguished Scholar of the Year in the Arts and Humanities. She is an Organization of American Historians Distinguished Lecturer, and a 2019 University of Illinois Public Voices Fellow.
Accessibility: Our store is wheelchair accessible, however--there is a narrow hallway and sharp 90-degree turn on the way to our bathrooms. Seating is first-come, first-served, but we are happy to reserve seats for people with disabilities. We have LED lighting that can be adjusted with dimmers. Please call the store at 773-769-9299 the day of the event if you need a reserved seat or have additional questions.
Event date:
Friday, February 28, 2020 - 7:00pm
Event address:
Women & Children First
5233 N. Clark St.
Chicago, IL 60640

Fag Hags, Divas and Moms: The Legacy of Straight Women in the AIDS Community (Paperback)