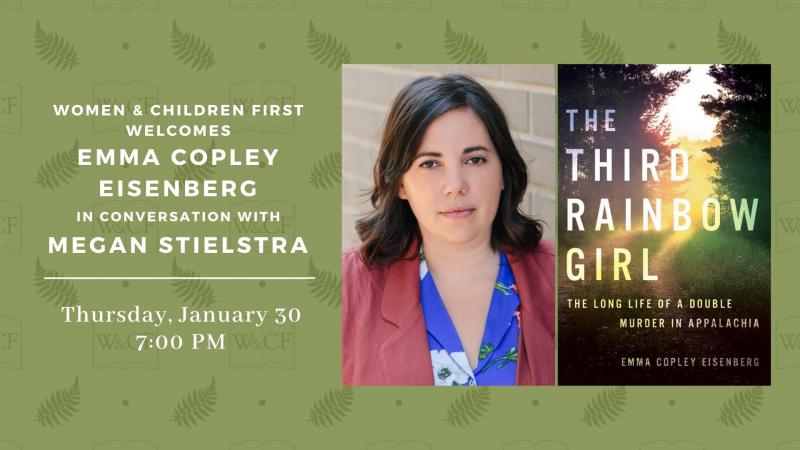 Please join us for an author conversation and book-signing for The Third Rainbow Girl: The Long Life of a Double Murder in Appalachia by Emma Copley Eisenberg. For this event, Emma will be in conversation with Megan Stielstra.

Register HERE for this free event. Registration is encouraged but not required.

A stunningly written investigation of the murder of two young women--showing how a violent crime casts a shadow over an entire community.

In the early evening of June 25, 1980 in Pocahontas County, West Virginia, two middle-class outsiders named Vicki Durian, 26, and Nancy Santomero, 19, were murdered in an isolated clearing. They were hitchhiking to a festival known as the Rainbow Gathering but never arrived; they traveled with a third woman however, who lived. For thirteen years, no one was prosecuted for the "Rainbow Murders," though deep suspicion was cast on a succession of local residents in the community, depicted as poor, dangerous, and backward. In 1993, a local farmer was convicted, only to be released when a known serial killer and diagnosed schizophrenic named Joseph Paul Franklin claimed responsibility. With the passage of time, as the truth seemed to slip away, the investigation itself caused its own traumas--turning neighbor against neighbor and confirming a fear of the violence outsiders have done to this region for centuries.

Emma Copley Eisenberg spent years living in Pocahontas and re-investigating these brutal acts. Using the past and the present, she shows how this mysterious act of violence has loomed over all those affected for generations, shaping their fears, fates, and the stories they tell about themselves. In The Third Rainbow Girl, Eisenberg follows the threads of this crime through the complex history of Appalachia, forming a searing and wide-ranging portrait of America--its divisions of gender and class, and of its violence.

Emma Copley Eisenberg is a writer whose work has appeared in Granta, VQR, McSweeney's, Tin House, The Paris Review online, The New Republic, Salon, Slate, and elsewhere. Her work has been supported by the Millay Colony for the Arts, the Elizabeth George Foundation, Lambda Literary, and the New Economy Coalition. Her reporting has been recognized by GLAAD, the New York Association of Black Journalists, the Deadline Club and Longreads' Best Crime Reporting 2017. Eisenberg lives in Philadelphia, where she co-directs Blue Stoop, a community hub for the literary arts.

Megan Stielstra is the author of three collections: The Wrong Way To Save Your Life, Once I Was Cool, and Everyone Remain Calm. Her work appears in the Best American Essays, New York Times, Chicago Tribune, Chicago Reader, Poets & Writers, The Believer, Longreads, Tin House, Guernica, Catapult, LitHub, Buzzfeed Reader, The Rumpus, and elsewhere. A longtime company member with 2nd Story, she has told stories for National Public Radio, Radio National Australia, Museum of Contemporary Art, Goodman Theatre, and regularly with The Paper Machete live news magazine at The Green Mill. She teaches creative nonfiction at Northwestern University.

Accessibility: Our store is wheelchair accessible, however--there is a narrow hallway and sharp 90-degree turn on the way to our bathrooms. Seating is first-come, first-served, but we are happy to reserve seats for people with disabilities. We have LED lighting that can be adjusted with dimmers. Contact the bookstore for seating reservations or other questions at 773-769-9299.

The Third Rainbow Girl: The Long Life of a Double Murder in Appalachia (Hardcover)