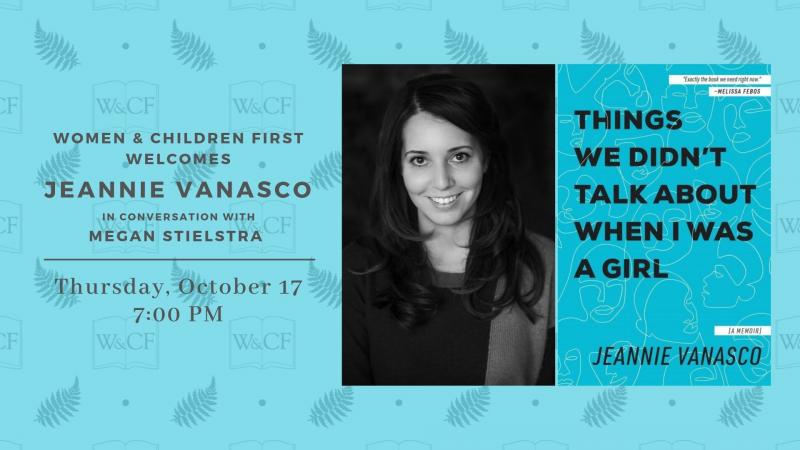 Join us as we welcome Jeannie Vanasco in honor of her new memoir, Things We Didn't Talk About When I Was a Girl. For this event, Jeannie will be in conversation with Megan Stielstra.
Register for free for this event HERE. Registration is encouraged but not required.
Jeannie Vanasco has had the same nightmare since she was a teenager. She startles awake, saying his name. It is always about him: one of her closest high school friends, a boy named Mark. A boy who raped her.

When her nightmares worsen, Jeannie decides—after fourteen years of silence—to reach out to Mark. He agrees to talk on the record and meet in person. “It’s the least I can do,” he says.
Jeannie details her friendship with Mark before and after the assault, asking the brave and urgent question: Is it possible for a good person to commit a terrible act? Jeannie interviews Mark, exploring how rape has impacted his life as well as her own. She examines the language surrounding sexual assault and pushes against its confines, contributing to and deepening the #MeToo discussion.

Exacting and courageous, Things We Didn't Talk About When I Was A Girl is part memoir, part true crime record, and part testament to the strength of female friendships—a recounting and reckoning that will inspire us to ask harder questions and interrogate our biases. Jeannie Vanasco examines and dismantles long-held myths of victimhood, discovering grace and power in this genre-bending investigation into the trauma of sexual violence.
Jeannie Vanasco is the author of the The Glass Eye. Featured by Poets & Writers as one of the five best literary nonfiction debuts of 2017, The Glass Eye was also selected as a Barnes & Noble Discover Great New Writers Pick, an Indies Introduce Pick, and an Indie Next Pick. Her nonfiction has appeared in The Believer, the New York Times​ Modern Love, NewYorker.com, and the Times Literary Supplement, and her essays have twice been named notable selections in Best American Essays. Her poetry has appeared in Little Star, Poet's Country, Prairie Schooner, and elsewhere, and her poetry honors include an Emerging Poets Fellowship from Poets House and an Amy Award from Poets & Writers. She lives in Baltimore and is an assistant professor of English at Towson University.
Megan Stielstra is the author of three collections: The Wrong Way To Save Your Life, Once I Was Cool, and Everyone Remain Calm. Her work appears in the Best American Essays, New York Times, Chicago Tribune, Chicago Reader, Poets & Writers, The Believer, Longreads, Tin House, Guernica, Catapult, LitHub, Buzzfeed Reader, The Rumpus, and elsewhere. A longtime company member with 2nd Story, she has told stories for National Public Radio, Radio National Australia, Museum of Contemporary Art, Goodman Theatre, and regularly with The Paper Machete live news magazine at The Green Mill. She teaches creative nonfiction at Northwestern University.
Event date:
Thursday, October 17, 2019 - 7:00pm
Event address:
Women & Children First
5233 N. Clark St.
Chicago, IL 60640

Things We Didn't Talk About When I Was a Girl: A Memoir (Hardcover)