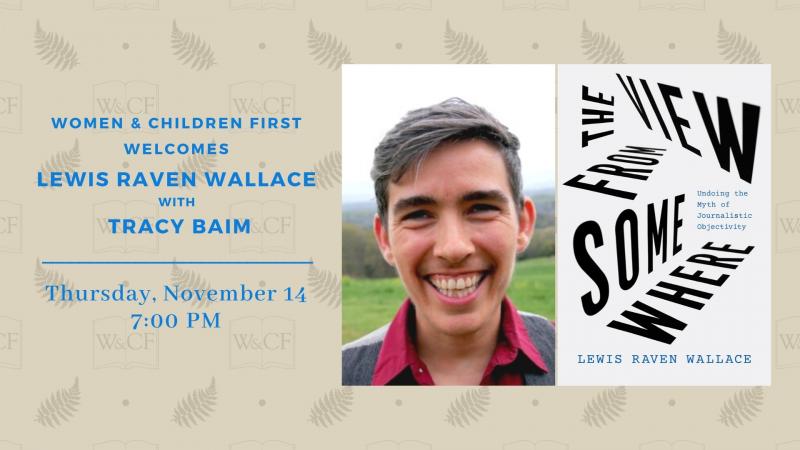 Please join us as we welcome Lewis Raven Wallace for a conversation with Tracy Baim in honor of Wallace's new book, The View from Somewhere: Undoing the Myth of Journalistic Objectivity

#MeToo. #BlackLivesMatter. #NeverAgain. #WontBeErased. Though both the right- and left-wing media claim “objectivity” in their reporting of these and other contentious issues, the American public has become increasingly cynical about truth, fact, and reality. In The View from Somewhere, Lewis Raven Wallace dives deep into the history of “objectivity” in journalism and how its been used to gatekeep and silence marginalized writers as far back as Ida B. Wells.

At its core, this is a book about fierce journalists who have pursued truth and transparency and sometimes been punished for it—not just by tyrannical governments but by journalistic institutions themselves. He highlights the stories of journalists who question “objectivity” with sensitivity and passion: Desmond Cole of the Toronto Star; New York Times reporter Linda Greenhouse; Pulitzer Prize-winner Rachel Kaadzi Ghansah; Peabody-winning podcaster John Biewen; Guardian correspondent Gary Younge; former Buzzfeed reporter Meredith Talusan; and many others. Wallace also shares his own experiences as a midwestern transgender journalist and activist who was fired from his job as a national reporter for public radio for speaking out against “objectivity” in coverage of Trump and white supremacy.

With insightful steps through history, Wallace stresses that journalists have never been mere passive observers—the choices they make reflect worldviews tinted by race, class, gender, and geography. He upholds the centrality of facts and the necessary discipline of verification but argues against the long-held standard of “objective” media coverage that asks journalists to claim they are without bias. Using historical and contemporary examples—from lynching in the nineteenth century to transgender issues in the twenty-first—Wallace offers a definitive critique of “objectivity” as a catchall for accurate journalism. He calls for the dismissal of this damaging mythology in order to confront the realities of institutional power, racism, and other forms of oppression and exploitation in the news industry.

Now more than ever, journalism that resists extractive, exploitive, and tokenistic practices toward marginalized people isn’t just important—it is essential. Combining Wallace’s intellectual and emotional journey with the wisdom of others’ experiences, The View from Somewhere is a compelling rallying cry against journalist neutrality and for the validity of news told from distinctly subjective voices.

Lewis Raven Wallace is an independent journalist, a co-founder of Press On, a southern movement journalism collective, and the host of The View from Somewhere podcast. He previously worked in public radio and is a longtime activist engaged in prison abolition, racial justice, and queer and trans liberation. He is a white transgender person from the Midwest and is now based in North Carolina.

Tracy Baim is publisher of the Chicago Reader. She is co-founder and former publisher of Windy City Times. Baim received the 2013 Chicago Headline Club Lifetime Achievement Award. In 2014, she was inducted into the National Lesbian and Gay Journalists Association Hall of Fame. She was inducted into the Association for Women Journalists-Chicago Chapter Hall of Fame in 2018. She is also in the Chicago LGBT Hall of Fame. Baim has written and/or edited 12 books, produced three films and has chaired or co-chaired numerous large-scale LGBT events.

The View from Somewhere: Undoing the Myth of Journalistic Objectivity (Hardcover)