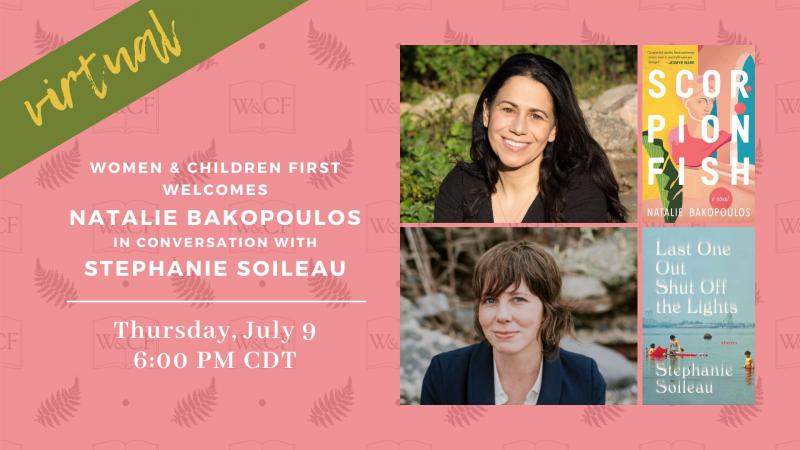 Join us for an author conversation with Natalie Bakopoulos & Stephanie Soileau in celebration of their recently published works of fiction!

This event will be streamed on Women & Children First's Crowdcast Channel. Register HERE to have the access link emailed to you.

In Scorpionfish, academic Mira returns to her childhood home in Athens after the unexpected deaths of her parents,. On her first night back, she encounters a new neighbor, a longtime ship captain who has found himself, for the first time in years, no longer at sea. As one summer night tumbles into another, Mira and the Captain’s voices drift across the balconies of their apartments, disclosing details and stories: of careers, of families, of love.

For Mira, love has so often meant Aris, an ex-boyfriend and rising Greek politician who has recently become engaged to a movie star. There is, too, her love for her dear friend Nefeli—a well-known artist who came of age during the military dictatorship—as well as Dimitra and Fady, a couple caring for a young refugee boy. Undergirding each relationship is the love that these characters have for Athens, a beautiful but complicated city that is equal parts lushness and sharp edges.

Natalie Bakopoulos is the author of The Green Shore and her work has appeared in Tin House, the Iowa Review, the New York Times, Granta, Ploughshares, and The Pen/O. Henry Prize Stories. She’s an assistant professor of creative writing at Wayne State University in Detroit and a faculty member of the summer program Writing Workshops in Greece. She lives in Ann Arbor, Michigan.

Last One Out Shut Off the Lights is an evocative portrait of the last-chance towns of southwest Louisiana, where oil development, industrial pollution, dying wetlands, and the ever-present threat of devastating hurricanes have eroded their inhabitants' sense of home. These eleven piercing stories feature indelible characters struggling to find a foothold in a world that is forever washing out from under them, people who must reckon with their ambivalence about belonging to a place so continually in flux.

Stephanie Soileau's fiction has appeared in Tin House, Oxford American, and Glimmer Train, among other magazines, and has been reprinted numerous times in New Stories from the South. She holds an MFA from the Iowa Writers' Workshop and has been a Stegner Fellow at Stanford as well as an NEA and Provincetown Fellow. Originally from Lake Charles, Louisiana, Soileau now lives in Chicago and teaches at the University of Chicago.

Last One Out Shut Off the Lights (Hardcover)