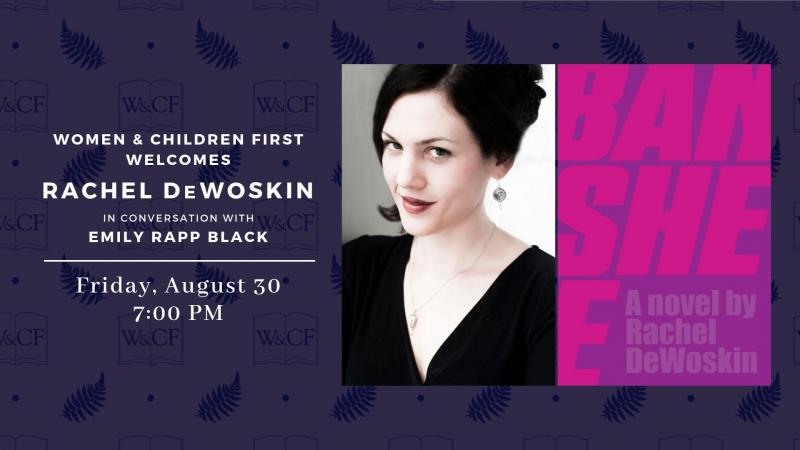 What would happen if a woman tried doing the things men get away with daily? Find out as award-winning author Rachel DeWoskin discusses her latest novel, Banshee. For this event, Rachel will be in conversation with Emily Rapp Black.

By turns heart-wrenching, uncomfortable, and hilarious, Banshee explores the internal monologue and actions of a woman who, upon being diagnosed with cancer, tumbles head-first into a midlife crisis and decides to be unapologetic about it. Banshee is a critical addition to the feminist canon, giving the reader a dramatized glimpse into what happens when women step outside of society’s rules and expectations as wives, mothers, and working professionals—and instead choose to behave the way men do on a day-to-day basis.

Rachel DeWoskin is the author of six books: Blind, Big Girl Small, Foreign Babes in Beijing, Repeat After Me, Someday We Will Fly, and Banshee. Her essays and articles have appeared in The New Yorker, Vanity Fair, The Sunday Times Magazine of London, Teachers and Writers, and numerous anthologies. She spent her twenties in China as the unlikely star of a nighttime soap opera, which became the basis for her memoir. DeWoskin is on the core fiction faculty at the University of Chicago, and is an affiliated faculty member of the Centers for East Asian Studies and Jewish Studies.

Emily Rapp Black is the author of Poster Child: A Memoir and The Still Point of the Turning World, which was a New York Times Bestseller and a finalist for the PEN Center Literary Award in Nonfiction. Her essays have appeared in Vogue, LENNY LETTER, the New York Times, and several anthologies, including The Modern Loss Anthology and O's Little Guide to Starting Over.