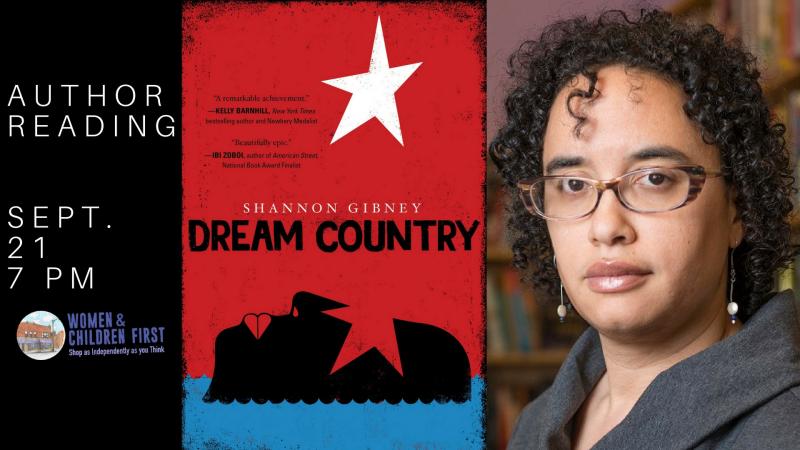 Join us as we welcome Shannon Gibney for a reading and moderated conversation with Rachel DeWoskin for Gibney's new Young Adult novel, Dream Country.

Dream Country begins in suburban Minneapolis at the moment when 17-year-old Kollie Flomo begins to crack under the strain of his life as a Liberian refugee. He's exhausted by being at once too black and not black enough for his African American peers and worn down by the expectations of his own family and the Liberian community. When his frustration finally spills into violence and his parents send him back to Monrovia to reform school, the story shifts. The story ultimately encompasses five generations of Kollie’s family. This is a riveting tale of the nightmarish spiral of death and exile connecting America and Africa, and of how one determined young dreamer--Kollie’s sister, Angel--tries to break free and gain control of her destiny.

Shannon Gibney is an author and university professor. Her novel See No Color, drawn from her life as a transracial adoptee, won the Minnesota Book Award and was hailed by Publishers Weekly as "an unflinching look at the complexities of racial identity." Her essay "Fear of a Black Mother" appears in the anthology A Good Time for the Truth. She lives with her two Liberian-American children in Minneapolis.

Rachel DeWoskin’s fourth book, the critically acclaimed novel, Blind, was published by Penguin in August, 2014. Her novel, Big Girl Small, received the 2012 American Library Association’s Alex Award and was named one of the top 3 books of 2011 by Newsday. DeWoskin’s memoir, Foreign Babes in Beijing about the years she spent in China as the unlikely star of a Chinese soap opera, has been published in six countries, optioned first by Paramount for a feature film and then by HBO to be developed into a television series, for which DeWoskin co-wrote the pilot episode. Her debut novel Repeat After Me, about a Chinese dissident navigating New York City in 1989, won a ForeWord Magazine Book of the Year Award. She has written essays and articles for Vanity Fair, The Sunday Times Magazine of London, Teachers and Writers, and anthologies including Found: Requiem for a Paper Bag, and Wanderlust. Her poems have appeared in journals including Ploughshares, Seneca Review, New Delta Review, Nerve Magazine and The New Orleans Review. She teaches fiction at the University of Chicago. Her forthcoming YA novel is Someday We Will Fly.
Event date:
Friday, September 21, 2018 - 7:00pm to 8:30pm
Event address:
Women & Children First
5233 N. Clark St.
Chicago, IL 60640