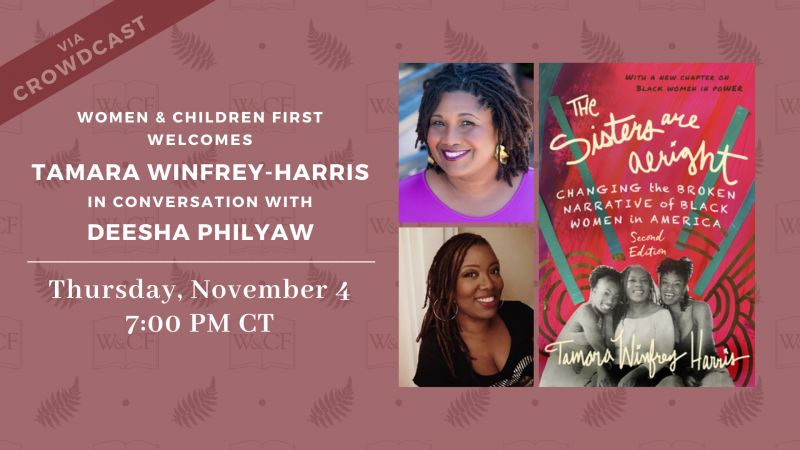 Join us on our Crowdcast Channel to celebrate the release of the second edition of The Sisters Are Alright: Changing the Broken Narrative of Black Women in America by Tamara Winfrey-Harris. For event, Winfrey-Harris will be in conversation with Deesha Philyaw.

The latest edition of this bestseller features new interviews with diverse Black women about marriage, motherhood, health, sexuality, beauty, and more. Alongside these authentic experiences and fresh voices, Winfrey Harris explores the evolution of stereotypes of Black women, with new real-life examples, such as the rise of blackfishing and digital blackface (which help white women rise to fame) and the media’s continued fascination with Black women’s sexuality (as with Cardi B or Megan Thee Stallion).

The second edition also includes a new chapter on Black women and power that explores how persistent stereotypes challenge Black women’s recent leadership and achievements in activism, community organizing, and politics. The chapter includes interviews with activists and civic leaders and interrogates media coverage and perceptions of Stacey Abrams, Vice President Kamala Harris, and others.

Winfrey Harris exposes anti–Black woman propaganda and shows how real Black women are pushing back against racist, distorted cartoon versions of themselves. She counters warped prejudices with the straight-up truth about being a Black woman in America.

Tamara Winfrey-Harris is a writer who specializes in the ever-evolving space where current events, politics and pop culture intersect with race and gender. She says, “I want to tell the stories of Black women and girls, and deliver the truth to all those folks who got us twisted—tangled up in racist and sexist lies. I want my writing to advocate for my sisters. We are better than alright. We are amazing.” Well-versed on a range of topics, including Beyoncé’s feminism; Rachel Dolezal’s white privilege; and the Black church and female sexuality, Tamara has been published in media outlets, including The New York Times, The Atlantic, Cosmopolitan, New York Magazine and The Los Angeles Times. And she has been called to share her analysis on media outlets, including NPR’s “Weekend Edition” and Janet Mock’s “So Popular” on MSNBC.com, and on university campuses nationwide. Tamara’s first book, The Sisters Are Alright: Changing the Broken Narrative of Black Women in America was published by Berrett-Koehler Publishers in 2015 and called “a myth-busting portrait of Black women in America” by The Washington Post. The book won the Phillis Wheatley Award, IndieFab Award, Independent Publishers Living Now Award and the IPPY Award. Her sophomore effort Dear Black Girl: Letters From Your Sisters On Stepping Into Your Power published in March 2021. Her essays also appear in The Lemonade Reader: Beyonce, Black Feminism and Spirituality (Routledge, 2019); The Burden: African Americans and the Enduring Impact of Slavery (Wayne State University Press, 2018); Black in the Middle: An Anthology of the Black Midwest (Black Belt Publishing, 2020); and other books. Tamara is also the co-founder of Centering Sisters, LLC, an organization that unapologetically addresses the needs and issues of Black women, girls, and femmes.

Deesha Philyaw’s debut short story collection, The Secret Lives of Church Ladies, won the 2021 PEN/Faulkner Award for Fiction, the 2020/2021 Story Prize, and the 2020 LA Times Book Prize: The Art Seidenbaum Award for First Fiction and was a finalist for the 2020 National Book Award for Fiction. The Secret Lives of Church Ladies focuses on Black women, sex, and the Black church, and is being adapted for television by HBO Max with Tessa Thompson executive producing. Deesha is also a Kimbilio Fiction Fellow and will be the 2022-2023 John and Renée Grisham Writer-in-Residence at the University of Mississippi.

Image Description: A mauve banner with a leaf pattern background featuring two close-up photos on top of one another of Tamara Winfrey-Harris (top) and Deesha Philyaw (bottom). Both Black women are smiling. Winfrey Harris is wearing a bright purple top and Philyaw is wearing a black t-shirt. Beside these photographs is the cover image of The Sisters Are Alright, which features a hot pink background and green stripes soaring up from a black-and-white photograph of three Black women smiling.
Event date:
Thursday, November 4, 2021 - 7:00pm
Event address:
Virtual on Crowdcast

The Sisters Are Alright, Second Edition: Changing the Broken Narrative of Black Women in America (Paperback)