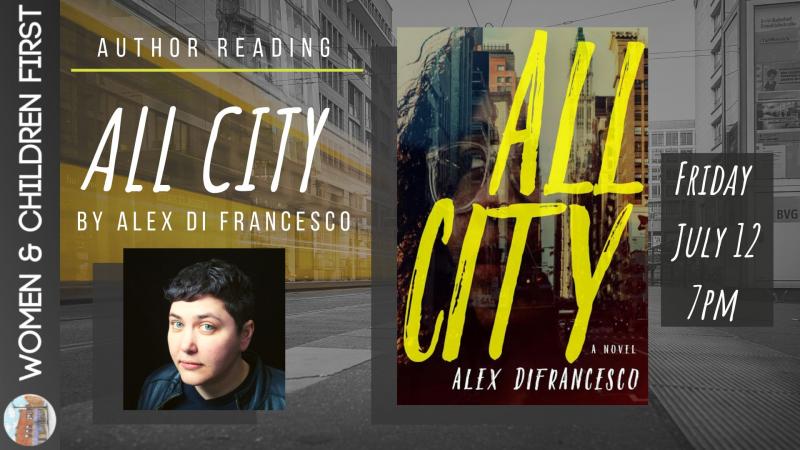 Please join us for a reading and book-signing celebrating ALL CITY by Alex DiFrancesco. For this event, Alex will be joined by M;Margo and Penelope Jeanne Brannen.

In a near-future New York City ravaged by climate change and economic inequality, a superstorm hits, leaving behind only those who had nowhere else to go and no way to get out. Among those who remain are 24-year-old Makayla, who works in the city’s most ubiquitous convenience store chain, and Jesse, an 18-year-old, genderqueer anarchist living in an abandoned IRT station in the Bronx. In the aftermath of the storm, Jesse joins Makayla’s group of remainders in an abandoned luxury condo building, carving out a small sanctuary in the midst of a destroyed city.

Meanwhile, mysterious, colorful murals begin to appear throughout NYC, bringing hope to the forsaken and left-behind. But the storm’s castaways aren’t the only ones who find beauty in the art: the media, having long abandoned the supposedly-hopeless metropolis, “discovers” the emergence of the murals. When one appears on Makayla and Jesse’s repurposed luxury condo, it is only a matter of time before the landlord class comes back to claim the city for themselves.

Alex DiFrancesco is the author of the essay collection Psychopomps. They have published fiction in The Carolina Quarterly, The New Ohio Review, and Monkeybicycle, and they are a winner of Sundress Academy for the Arts' 2017 OutSpoken contest for LGBTQ+ writing. DiFrancesco's non-fiction has appeared in The Washington Post, Tin House, Longreads, Brevity, and was a finalist in Cosmonauts Avenue's inaugural non-fiction prize. Their storytelling has been featured at The Fringe Festival, Life of the Law, The Queens Book Festival, and The Heart podcast. DiFrancesco is also a skilled bread baker and pastry cook, a passionate activist and advocate, and has a small, wonderful cat named Sylvia Rivera-Katz.

M; Margo is a person who writes and resides in Cleveland, Ohio. Ver most recent books are pink maggit (Ghost City Press, 2019) and road road road road road (ma press, 2019). Ve has a website (translucent-snapdragons.gq) and a Twitter (@wigglytuff_pink).
Penelope Jeanne Brannen is a mother, a poet, and a giant wolf. It has been published in Spy Kids Review, Zoomoozophone Review, and Voicemail Poems. When it is not working or writing it enjoys spending its time astral projecting and watching reality television.
Event date:
Friday, July 12, 2019 - 7:00pm
Event address:
Women & Children First
5233 N. Clark St.
Chicago, IL 60640

All City: A Novel (Paperback)