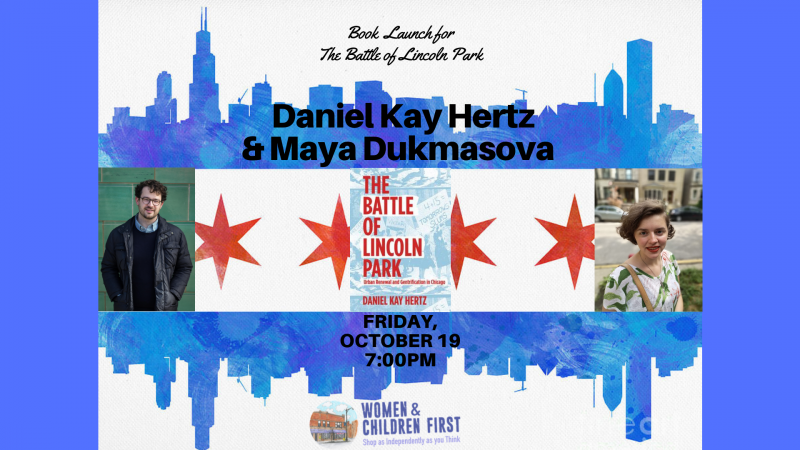 Please join us in celebrating the publication of The Battle of Lincoln Park by Daniel Kay Hertz. He will be joined by local journalist Maya Dukmasova for this discussion and book signing.

In the years after World War II, a movement began to bring the middle class back from the Chicago suburbs to the Lincoln Park neighborhood on the city's North Side. In place of the old, poorly maintained apartments and dense streetscapes of taverns and butchers, "rehabbers" imagined a new kind of neighborhood--a renovated, modern community that held on to the convenience, diversity, and character of a historic urban quarter, but also enjoyed the prosperity and privileges of a new subdivision. But as the old buildings came down, cheap studios were combined to create ever more spacious, luxurious homes. Property values rose swiftly, and the people who were evicted to make room for progress began to assert their own ideas about the future of Lincoln Park. Over the course of the 1960s, divisions within the community deepened. Letters and picket lines gave way to increasingly violent strikes and counterstrikes as each camp tried to settle the same existential questions that beguile so many cities today: Who is this neighborhood for? And who gets to decide?

Daniel Kay Hertz has written about urban issues for outlets including City Observatory, The Atlantic, Chicago Magazine, South Side Weekly, and the Chicago Reader. He grew up in Chicago, Madison, and Evanston, and lives in Edgewater.

Maya Dukmasova is a staff writer at the Chicago Reader who covers housing, local social justice movements, and the courts. She's won several local and national journalism awards for long-form investigative reporting, in-depth profiles, and features with a focus on history.

Our store is wheelchair accessible, however our bathrooms are not--there is a narrow hallway and sharp 90-degree turn on the way to our bathrooms. Seating is first come, first served, but we are happy to reserve seats for people with disabilities. Please call the store at 773-769-9299 the day of the event if you need a reserved seat or have additional questions.

The Battle of Lincoln Park: Urban Renewal and Gentrification in Chicago (Paperback)