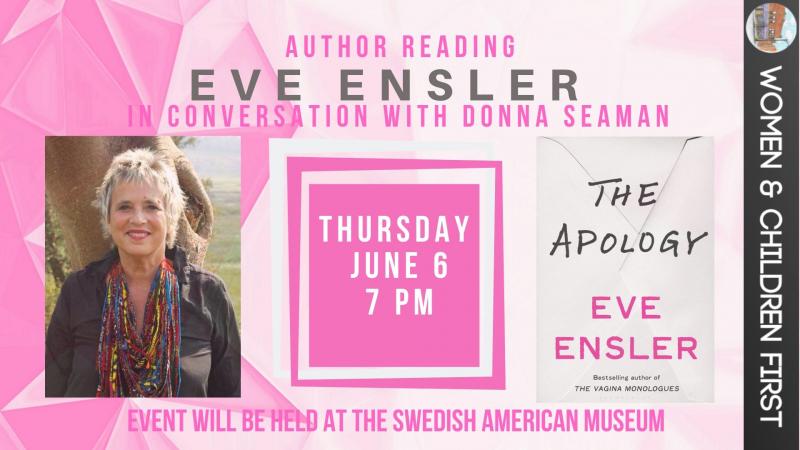 Please join us as we welcome Eve Ensler back to Chicago in honor of her new book, The Apology. This event will include a reading, a conversation with Eve Ensler & Donna Seaman, audience Q&A, and book signing.

Please note: this ticketed event will be held at The Swedish American Museum (5211 N. Clark St.). Each ticket includes a copy of The Apology by Eve Ensler, which attendees will pick up at the event.

Like millions of women, Eve Ensler has been waiting much of her lifetime for an apology. Sexually and physically abused by her father, Eve has struggled her whole life from this betrayal, longing for an honest reckoning from a man who is long dead. After years of work as an anti-violence activist, she decided she would wait no longer; an apology could be imagined, by her, for her, to her. The Apology, written by Eve from her father's point of view in the words she longed to hear, attempts to transform the abuse she suffered with unflinching truthfulness, compassion, and an expansive vision for the future.

Through The Apology Eve has set out to provide a new way for herself and a possible road for others, so that survivors of abuse may finally envision how to be free. She grapples with questions she has sought answers to since she first realized the impact of her father's abuse on her life: How do we offer a doorway rather than a locked cell? How do we move from humiliation to revelation, from curtailing behavior to changing it, from condemning perpetrators to calling them to reckoning? What will it take for abusers to genuinely apologize?

Remarkable and original, The Apology is an acutely transformational look at how, from the wounds of sexual abuse, we can begin to re-emerge and heal. It is revolutionary, asking everything of each of us: courage, honesty, and forgiveness.

Eve Ensler is an internationally bestselling author and an award-winning playwright whose works include The Vagina Monologues, The Good Body, Insecure at Last, and I Am an Emotional Creature, since adapted for the stage as Emotional Creature. She is the founder of V-Day, the global movement to end violence against women and girls, which has raised more than $90 million for local groups and activists, and inspired the global action One Billion Rising. Ensler lives in Paris and New York City.

Donna Seaman is an editor for Booklist, a member of the American Writers Museums Content Leadership Team, and a recipient of the Studs Terkel Humanities Service Award and the Louis Shores Award for excellence in book reviewing. Seaman is the author of Identity Unknown: Rediscovering Seven American Women Artists.

Tickets are non-refundable. If you purchase a ticket and are unable to attend, you'll have 30 days after the event to pick up your copy of "The Apology" by Eve Ensler at the bookstore.