Author Reading: Evidence of Being by Darius Bost 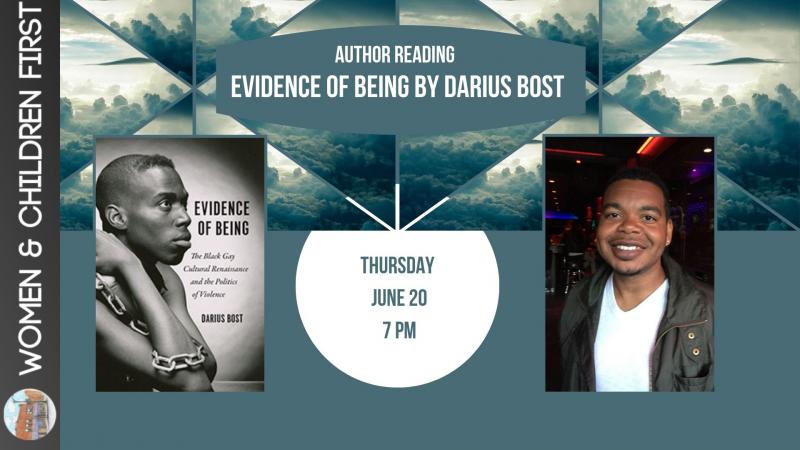 Please join us for a reading, audience Q&A, and book signing for Evidence of Being by Darius Bost.

Evidence of Being opens on a grim scene: Washington DC’s gay black community in the 1980s, ravaged by AIDS, the crack epidemic, and a series of unsolved murders, seemingly abandoned by the government and mainstream culture. Yet in this darkest of moments, a new vision of community and hope managed to emerge. Darius Bost’s account of the media, poetry, and performance of this time and place reveals a stunning confluence of activism and the arts. In Washington and New York during the 1980s and ’90s, gay black men banded together, using creative expression as a tool to challenge the widespread views that marked them as unworthy of grief.

Darius Bost is Assistant Professor of Ethnic Studies in the School for Cultural and Social Transformation at the University of Utah.  His first book, Evidence of Being was supported by the Woodrow Wilson Foundation, the Center for the Study of Race, Ethnicity, and Gender in the Social Sciences at Duke University, the President's Office and the Office of Research and Sponsored Programs at San Francisco State University, the Martin Duberman Visiting Scholars Program at the New York Public Library, and the Provost’s Office at the University of Pennsylvania. Related research has been published or is forthcoming in Criticism, Journal of American History, Souls, The Black Scholar, Palimpsest, Journal of West Indian Literature, Occasion, and several edited collections.

Evidence of Being: The Black Gay Cultural Renaissance and the Politics of Violence (Paperback)