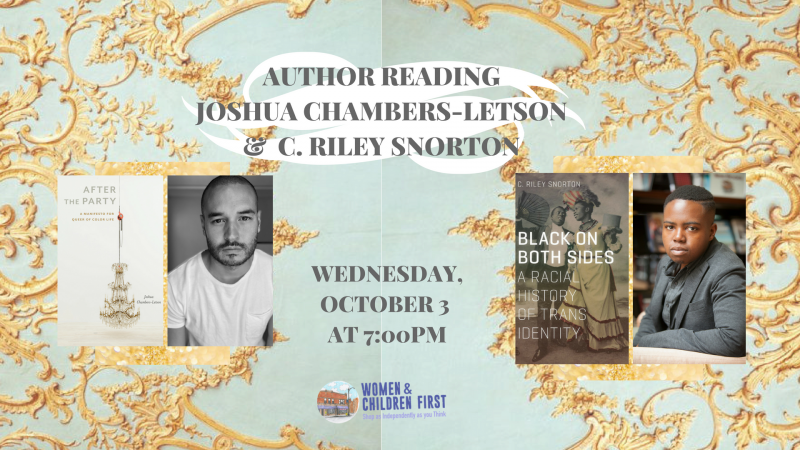 In this joint reading, Riley Snorton and Joshua Chambers-Letson will present selections from their recently published books, meditating on the power of queer of color and black trans grief. In Black on Both Sides, winner of the 2018 Lambda Literary Award for trans nonfiction, C. Riley Snorton identifies multiple intersections between blackness and transness from the mid-nineteenth century to the present day. Drawing on a wide range of historical materials, Snorton’s work connects constructs of race and gender mutability and also furthers our capacity to conceive more livable black and trans worlds.  After the Party tells the story of queer black, brown, and Asian artists who mobilize performance to survive the threatening and overlapping forces of white supremacy, capitalism, colonialism, and heteropatriarchy. It also paints a portrait of the worldmaking and life sustaining powers of performances forged in the spaces between queer of color life and death.

Joshua Chambers-Letson is a writer and performance theorist who researches and teaches courses in performance studies, critical race theory, political theory, and queer of color critique. An associate professor of Performance Studies at Northwestern University, he is the author of A Race So Different: Law and Performance in Asian America.

C. Riley Snorton is a scholar, author, and activist whose work focuses on historical perspectives of gender, sexuality, and race. His publications include Nobody Is Supposed to Know: Black Sexuality on the Down Low. Snorton is professor of English and Gender and Sexuality Studies at the University of Chicago.

After the Party: A Manifesto for Queer of Color Life (Sexual Cultures #4) (Paperback)

Black on Both Sides: A Racial History of Trans Identity (Paperback)