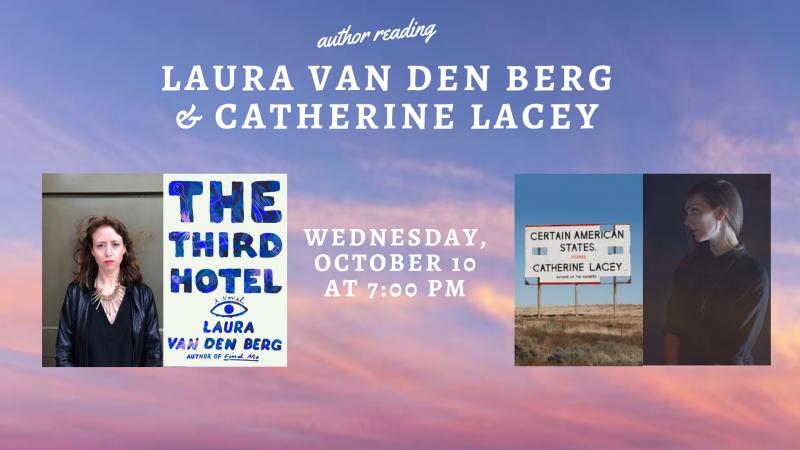 Join us as we welcome Laura van den Berg and Catherine Lacey for a reading and conversation followed by a book-signing in celebration of their most recent books, The Third Hotel (van den Berg) and Certain American States (Lacey).

ABOUT THE THIRD HOTEL

Shortly after Clare arrives in Havana, Cuba, to attend the annual Festival of New Latin American Cinema, she finds her husband, Richard, standing outside a museum. He’s wearing a white linen suit she’s never seen before, and he’s supposed to be dead. Grief-stricken and baffled, Clare tails Richard, a horror film scholar, through the newly tourist-filled streets of Havana, clocking his every move. As the distinction between reality and fantasy blurs, Clare finds grounding in memories of her childhood in Florida and of her marriage to Richard, revealing her role in his death and reappearance along the way. The Third Hotel is a propulsive, brilliantly shape-shifting novel from an inventive author at the height of her narrative powers.

Catherine Lacey brings her narrative mastery to Certain American States, her first collection of short stories. As with her acclaimed novels Nobody Is Ever Missing and The Answers, she gives life to a group of subtly complex, instantly memorable characters whose searches for love, struggles with grief, and tentative journeys into the minutiae of the human condition are simultaneously gripping and devastating.

Laura van den Berg is the author of two story collections, What the World Will Look Like When All the Water Leaves Us and The Isle of Youth, and the novel Find Me. She is the recipient of a Rosenthal Family Foundation Award from the American Academy of Arts and Letters, the Bard Fiction Prize, an O. Henry Award, and a MacDowell Colony fellowship. Born and raised in Florida, she lives in Cambridge, MA, with her husband and dog.

​​Catherine Lacey is the author of Nobody Is Ever Missing, winner of a 2016 Whiting Award and a finalist for the New York Public Library’s Young Lions Fiction Award, and The Answers. In 2017, she was named one of Granta’s Best of Young American Novelists. Her essays and fiction have been published widely and translated into Italian, French, Dutch, Spanish, and German. She was born in Mississippi and is based in Chicago.

The Third Hotel: A Novel (Hardcover)