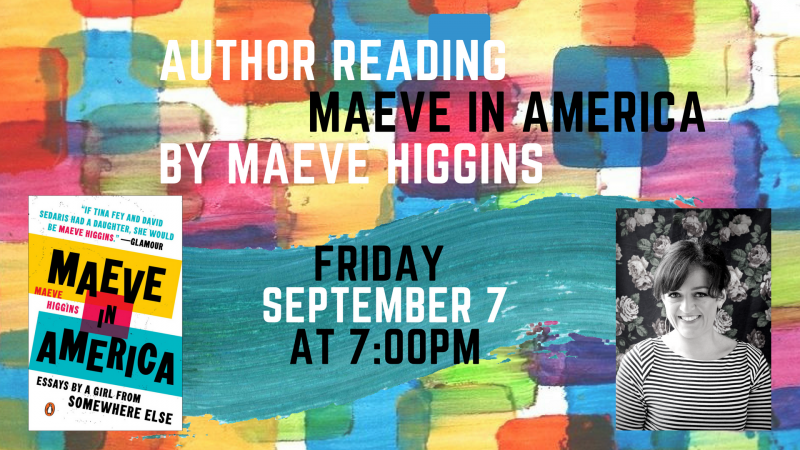 Join us as we welcome comedian and podcaster Maeve Higgins for a reading, conversation, and book-signing. For this event, Maeve will be in conversation with comedian Alex Kumin! Click HERE to RSVP.
Maeve Higgins was a bestselling memoirist and comedian in her native Ireland when, at the grand old age of thirty-one, she left the only home she’d ever known in search of something more. Like many women in their early thirties, she both was and was not the adult she wanted to be. At once smart, curious, and humane, Maeve in America is the story of how Maeve found herself, literally and figuratively, in New York City.
Here are stories of not being able to afford a dress for the ball, of learning to live with yourself while you’re still figuring out how to love yourself, of the true significance of realizing what sort of shelter dog you would be. Self-aware and laugh-out-loud funny, this collection is also a fearless exploration of the awkward questions in life, such as: Is clapping too loudly at a gig a good enough reason to break up with somebody? Is it ever really possible to leave home?

Together, the essays in Maeve in America create a startlingly funny and revealing portrait of a woman who aims for the stars but hits the ceiling, and the inimitable city that has helped shape who she is, even as she finds the words to make sense of it all.
Maeve Higgins is a contributing writer for The New York Times and the host of the hit podcast Maeve in America: Immigration IRL. She is a comedian who has performed all over the world, including in her native Ireland, Edinburgh, Melbourne, and Erbil. Now based in New York, she cohosts Neil deGrasse Tyson’s StarTalk, both the podcast and the TV show on National Geographic, and has also appeared on Comedy Central’s Inside Amy Schumer and on WNYC’s 2 Dope Queens.
Alex Kumin's bold and socially conscious standup delights crowds across the city of Chicago and around the US. She is an alumni of the nation's longest running independent standup comedy showcase, The Lincoln Lodge, through which she also teaches Chicago's favorite all-female standup class, Feminine Comique. Her monthly showcase, Diamond Comedy Hour, takes place at the Chicago Laugh Factory on the first Friday of the month, featuring the premiere female comedians in the city and beyond. She has opened for Rory Scovel, Aparna Nancherla, Jen Kirkman, Kyle Kinane, and Todd Barry, among others and was selected as one of eight comedians at Gilda's Laughfest - Best of the Midwest Competition 2017. She made her television debut on WCIU's "Chicago's One Night Standup" and has appeared in NBC Universal's Breakout Festival ('16, '17, '18), Limestone Comedy Festival, Orlando Indie Comedy Fest and The Chicago Comedy Exposition. In 2016 she was named a comic to watch by Timeout Chicago and was one of Chicago Reader's standout comedians of the year. She has been featured in Chicago Magazine as a comedian with "unapologetic honesty", as she tackles heavy hitting social issues like gender inequality and thigh chaffing.
Event date:
Friday, September 7, 2018 - 7:00pm
Event address:
5233 N. Clark St.
Chicago, IL 60640

Maeve in America: Essays by a Girl from Somewhere Else (Paperback)