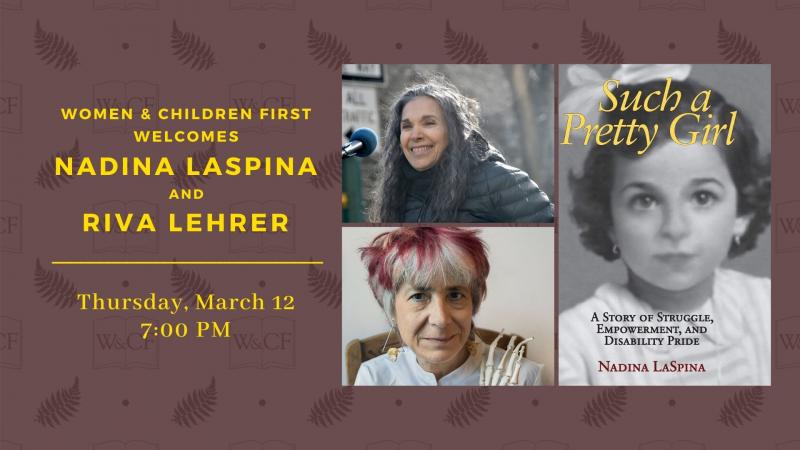 Please join us for a reading, conversation, and book signing in celebration of Such a Pretty Girl: A Story of Struggle, Empowerment, and Disability Pride by Nadina LaSpina. For this event, Nadina will be in conversation with Riva Lehrer.

Register for this free event HERE. Registration is encouraged but not required.

Such a Pretty Girl is Nadina LaSpina's story--from her early years in her native Sicily, where still a baby she contracts polio, to her adolescence and youth in America, spent almost entirely in hospitals, where she is tortured in the quest for a cure and made to feel that her body no longer belongs to her; to her rebellion and activism in the disability rights movement.

LaSpina's personal growth parallels the movement's political development--from coming together, organizing, and fighting against exclusion from public and social life, to the forging of a common identity, the blossoming of disability arts and culture, and the embracing of disability pride.

LaSpina's story is a journey to find one's place in an ableist world. La Spina refutes all stereotypical narratives of disability. Through the telling of her life's story, without editorializing, she shows the harm that the overwhelming focus on pity and on a cure that remains elusive has done to disabled people. Her story exposes the disability prejudice ingrained in our sociopolitical system and denounces the oppressive standards of normalcy in a society that devalues those who are different and denies them basic rights.

Written as continuous narrative and in a subtle and intimate voice, Such a Pretty Girl is a memoir as captivating as a novel. It is one of the few disability memoirs to focus on activism, and one of the first by an immigrant.

Nadina LaSpina has been an activist in the disability rights movement from its beginning in the very early 70s. She has been arrested countless times for civil disobedience, and you can still find her in the streets with Disabled In Action, ADAPT, Not Dead Yet, and The Disability Caucus, which she and her husband founded with the purpose of intersecting with other groups fighting for social justice. LaSpina is also an educator. After teaching Italian Language and Literature for many years (at NYU and at Fordham University), in the 90s at the New School University, she created and taught courses in Disability Studies—then still a new field. She has been the recipient of many awards for her activism, and was Grand Marshal of the 2019. Disability Pride Parade NYC. She is also known for her rousing speeches at rallies. LaSpina's memoir Such a Pretty Girl was among Booklist's best books of 2019. LaSpina’s articles, essays, and stories have appeared in publications as varied as AbleNews, New Politics, and Bookwoman among others.

Riva Lehrer is an artist, writer and curator who focuses on the socially challenged body. She is best known for representations of people with impairments, and those whose sexuality or gender identity have long been stigmatized. Ms. Lehrer’s work has been seen in venues such as the National Portrait Gallery of the Smithsonian, Yale University, the United Nations, the National Museum of Women in the Arts in Washington, DC and the Chicago Cultural, among others. She is the recipient of several awards including the 2017 3Arts MacDowell Fellowship for writing, the 2014 Carnegie Mellon Fellowship at Haverford and Bryn Mawr Colleges and grants from the Illinois Arts Council and the National Endowment for the Arts, among others. Her memoir, Golem Girl, will be published in October 2020. Ms. Lehrer is on faculty at the School of the Art Institute of Chicago, and instructor in the Medical Humanities Departments of Northwestern University.

Such a Pretty Girl: A Story of Struggle, Empowerment, and Disability Pride (Paperback)