Author Reading: SHUT IT DOWN by Lisa Fithian 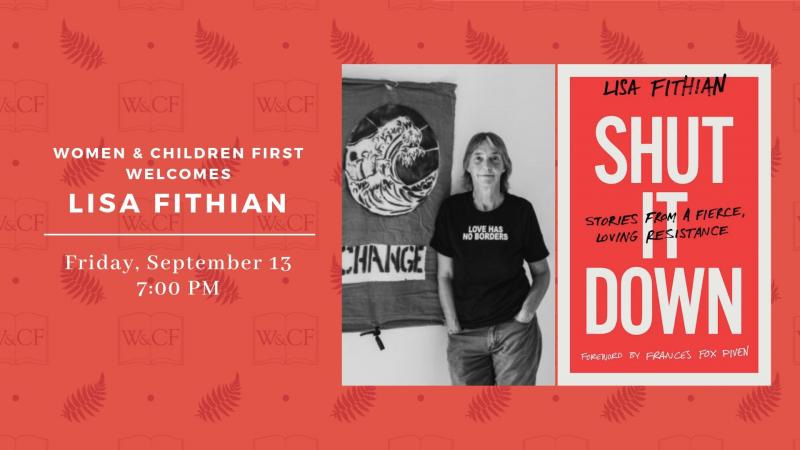 Join us as we welcome Lisa Fithian for a conversation and book signing in celebration, Shut It Down. For this event, Lisa will be in conversation with Katherine Don.

For decades, Lisa Fithian’s work as an advocate for civil disobedience and nonviolent direct action has put her on the frontlines of change. Described by Mother Jones as “the nation’s best-known protest consultant,” Fithian has supported countless movements including the Battle of Seattle in 1999, rebuilding and defending communities following Hurricane Katrina, Occupy Wall Street, and the uprisings at Standing Rock and in Ferguson. For anyone who wants to become more active in resistance or is just feeling overwhelmed or hopeless, Shut It Down offers strategies and actions you can take right now to promote justice and incite change in your own community.

In Shut It Down, Fithian shares historic, behind-the-scenes stories from some of the most important people-powered movements of the past several decades. She shows how movements that embrace direct action have always been, and continue to be, the most radical and rapid means for transforming the ills of our society. Shut It Down is filled with instructions and inspiration for how movements can evolve as the struggle for social justice continues in the Trump era and beyond.

While recognizing that electoral politics, legislation, and policy are all important pathways to change, Shut It Down argues that civil disobedience is not just one of the only actions that remains when all else fails, but a spiritual pursuit that protects our deepest selves and allows us to reclaim our humanity. Change can come, but only if we’re open to creatively, lovingly, and strategically standing up, sometimes at great risk to ourselves, to protect what we love.

Lisa Fithian is an anti-racist organizer who has worked for justice since the 1970s. Using creative, strategic nonviolent direct action and civil disobedience, she has won many battles and trained tens of thousands of activists while participating in a range of movements and mobilizations, including Occupy Wall Street, anti-WTO and corporate globalization protests all over the world, the climate justice movement, and more. Lisa enjoys walking, playing with children, gardening, cooking great food, being in the wild, and raising up new generations to be agents of change. She is grateful to play her part in manifesting a world rooted in respect, justice, and liberation.

Katherine Don is a freelance writer, book editor, and communications consultant. She is the author or co-author of eight nonfiction books, and her essays and journalism have appeared at Salon, The Atlantic, HuffPost, Bustle, and elsewhere. As a book editor, Katherine loves partnering with authors to bring out their unique voice and talents while making the dream version of their book a reality.

Shut It Down: Stories from a Fierce, Loving Resistance (Paperback)