Author Reading: WE LIVE FOR THE WE by Dani McClain 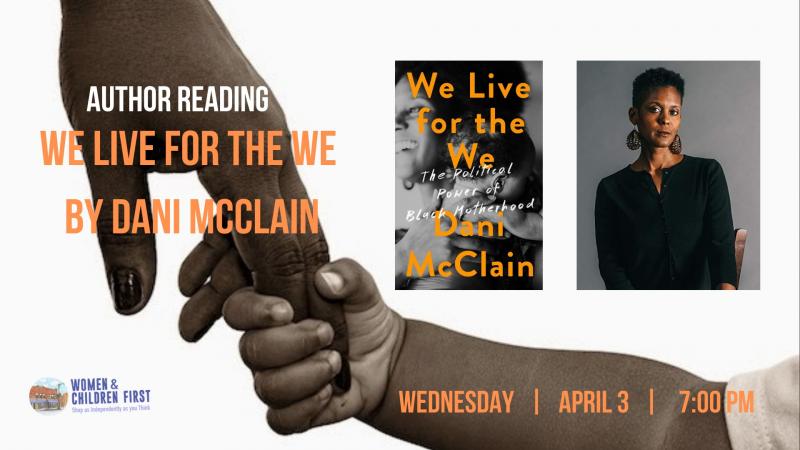 Join us for an author reading and book signing with Dani McClain in celebration of her new book, We Live for the We. McClain will be joined by special guests Andrea J. Ritchie and Yamani Hernandez.

McClain spoke with mothers on the frontlines of movements for social, political, and cultural change who are grappling with a black child's development from infancy to the teenage years, We Live for the We touches on everything from the importance of creativity to building a mutually supportive community to navigating one's relationship with power and authority.

Dani McClain writes and reports on race, reproductive health, and activism. She is a contributing writer at the Nation and a fellow at the Nation Institute. McClain's writing has appeared in numerous outlets, including Colorlines, the Rumpus, and Guernica. She was a staff reporter at the Milwaukee Journal Sentinel and has worked as a strategist with organizations including Color of Change and the Drug Policy Alliance. McClain lives with her family in Cincinnati.

Andrea J. Ritchie is the author of Invisible No More: Police Violence Against Black Women and Women of Color, and co-author of Say Her Name: Resisting Police Brutality Against Black Women and of Queer (In)Justice: The Criminalization of LGBT People in the United States. She is a Black lesbian immigrant who has been documenting, organizing, litigating, advocating and agitating around policing and criminalization of women and LGBTQ people of color for over two decades.

Yamani Hernandez is a visionary and strategic, queer, African-American, Buddhist leader committed to radical compassion and healing justice. Throughout her interdisciplinary career, she has used a creative and analytical skill-set to transform organizations, relationships and environments.  She became the Executive Director of the National Network of Abortion Funds (NNAF) in May 2015. During her tenure, the organization has grown dramatically in size, framing and capacity to build cultural and political power with its organizational and individual members as they remove financial and logistical barriers to abortion access by centering people who have abortions and organizing at the intersections of racial, economic and reproductive justice. Yamani built her career in reproductive justice through state based work on behalf of the sexual health, rights and identities of youth. Yamani holds a B.S. from Cornell University and an M.Arch. from the University of Washington. She was an inaugural Rockwood Reproductive Health, Rights and Justice Fellow, BOLD Directors Fellow, Stepping into Power Fellow, Ford Foundation Public Voices Fellow and a writer for Echoing Ida, a project of Forward Together that amplifies the voices of Black women and non-binary people. Yamani has shared her miscarriage and abortion stories with the 1 in 3 Campaign and lives in Chicago where she co-parents her teenaged boys. In her spare time she soaks up every healing modality she can and volunteers as a birth doula.

We Live for the We: The Political Power of Black Motherhood (Hardcover)