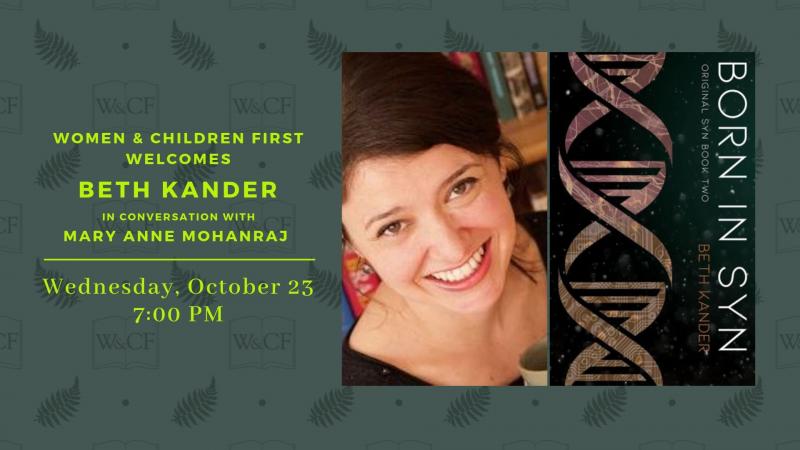 Please join us as we celebrate the release of Born in Syn by Beth Kander. For this event, Beth will be in conversation with Mary Anne Mohanraj.

How did we get here? That’s the question that drives each friend, each foe, and every strand of the stories woven together in Born in Syn. From an unusually intelligent infant, to individuals wrongly accused or imprisoned, to insiders who know things they wish they didn’t and outsiders determined to bulldoze their way into the action, dozens of small decisions and huge risks pile on top of one another, contributing to the creation of a future that will change everything. War. Ambition. Family. Betrayal. As every character hurtles us ever-faster forward, one truth becomes inescapable: Even the end of the world was once the beginning of someone’s story.

Beth Kander lives in Chicago, where stories keep her warm. Her dystopian trilogy Original Syn debuts in September 2018.  In addition to writing fiction, Beth is also an acclaimed playwright. Selected awards include a CORE Residency with American Theatre Company; Equity Library Theatre selection; Ashland New Plays Festival Winner 2016 and 2015; The Kilroys List (Honorable Mention, 2015 and 2016); Downstage Left Playwright Residency; Charles M. Getchell New Play Award; Eudora Welty New Play Awards (2013, 2010, 2008); and the Mississippi Theatre Association New Play Award. While living in Mississippi, Kander was named Best Writer by the Jackson Free Press three times. Beth holds degrees from Brandeis University, the University of Michigan, and Mississippi University for Women. PS: Possibly most interesting, a few years Beth's dog was accidentally in a viral video, which landed him appearances on Web Soup, Attack of the Show, and even in Jay Leno's monologue. Seriously. Hence her top professional goal (other than making the NYT Bestsellers List and making the world a better place) is to be marginally more famous than her dog.

Mary Anne Mohanraj received her Ph.D. from the University of Utah, specializing in post-colonial literature and creative writing. She is the author of several books, including her dissertation novel, Bodies in Motion, an exploration of sexuality, marriage, and Sri Lankan/American immigrant concerns. She currently serves as a referee for Foundation, the International Review of Science Fiction and as Director of both the Speculative Literature Foundation and DesiLit: A South Asian Arts Reviewt. Mohanraj has recently received an Illinois Arts Council fellowship, a Neff fellowship in English, a Steffenson-Canon fellowship in the Humanities, and the Scowcroft Prize for Fiction. She lives in Chicago and is currently writing a follow-up novel to Bodies in Motion.