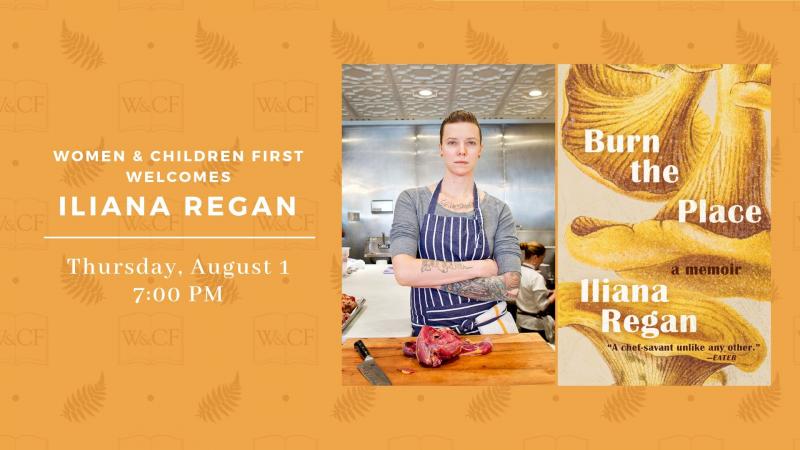 Join us for a reading, conversation, and book signing with Iliana Regan for her new memoir, Burn the Place. For thise event Iliana will be in conversation with Louisa Chu.

Burn the Place is a galvanizing memoir that chronicles Iliana Regan's journey from foraging on the family farm to running her Michelin-starred restaurant, Elizabeth. Regan grew up the youngest of four girls on a small farm in Northwest Indiana. Since childhood, Regan has had an intense, almost otherworldly connection with food and the earth it comes from, but connecting with people has always been more difficult. She was a little girl who longed to be a boy, gay in an intolerant community, an alcoholic before she turned twenty, and a woman in an industry dominated by men. Burn the Place tells Regan's story in raw and vivid prose and brings readers into worlds that are entirely original and unforgettable.

Iliana Regan is a self-taught chef. She is the founder and owner of the Michelin-starred "new gatherer" restaurant Elizabeth and the Japanese-inspired pub Kitsune, both located in Chicago. A James Beard Award and Jean Banchet Award nominee, Regan was named one of Food & Wine's Best New Chefs 2016.

Louisa Chu is a Chicago Tribune Food & Dining reporter and co-host of the Chewing podcast. Born in Hong Kong, raised in Chicago, she lived in Los Angeles, and Paris where she graduated from Le Cordon Bleu. She trained at El Bulli in Spain and cooked in Alaska. Previously she was a correspondent for Gourmet magazine and a fixer for Anthony Bourdain.

Burn the Place: A Memoir (Hardcover)