Book Launch Party: Death by the Bay by Patricia Skalka 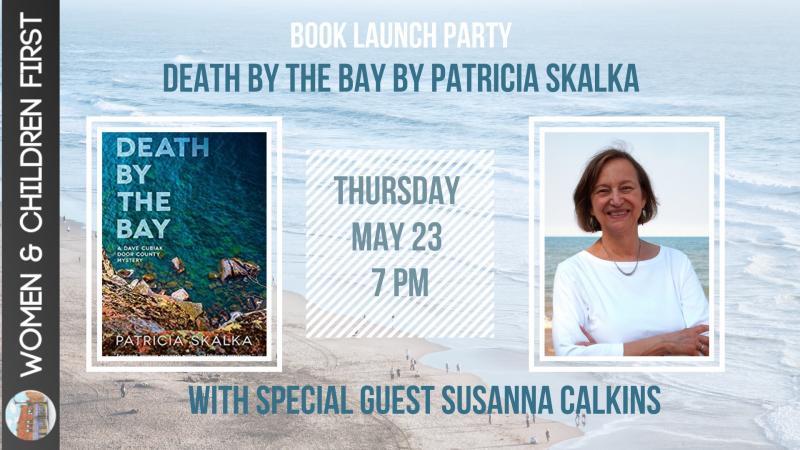 Join us for the book launch celebration for the fifth installment in the Dave Cubiak Door County Mystery series, Death by the Bay. For this event, author Patricia Skalka will be in conversation with Susanna Calkins. The two authors are both officers of the Chicagoland Chapter of Sisters in Crime!
After a prominent medical director collapses of a suspected heart attack, Sheriff Dave Cubiak is drawn into a web of lies and long-buried secrets. Dedicated and new fans alike will find themselves captivated as he untangles the twisted threads of this intricate mystery.
Patricia Skalka is the author of Death Stalks Door County, Death at Gills Rock, Death in Cold Water, and Death Rides the Ferry, the first four books in the popular Dave Cubiak Door County Mystery series. She is president of the Chicagoland chapter of Sisters in Crime and divides her time between Chicago and Door County, Wisconsin. A former staff writer at Reader’s Digest, she presents writing workshops throughout the United States.
Susanna Calkins writes the award-winning Lucy Campion historical mysteries set in 17th century London and the Speakeasy Murders set in 1920s Chicago (Minotaur/St. Martin’s). Her fiction has been nominated for the Mary Higgins Clark Award, the Agatha, the Bruce Alexander Historical Mystery (Lefty) and the Anthony, and was awarded  a Sue Feder Historical Mystery Award (the Macavity). Born and raised in Philadelphia, she lives in the Chicago area now, with her husband and two sons. Check out her website at www.susannacalkins.com
Event date:
Thursday, May 23, 2019 - 7:00pm
Event address:
Women & Children First
5233 N. Clark St.
Chicago, IL 60640