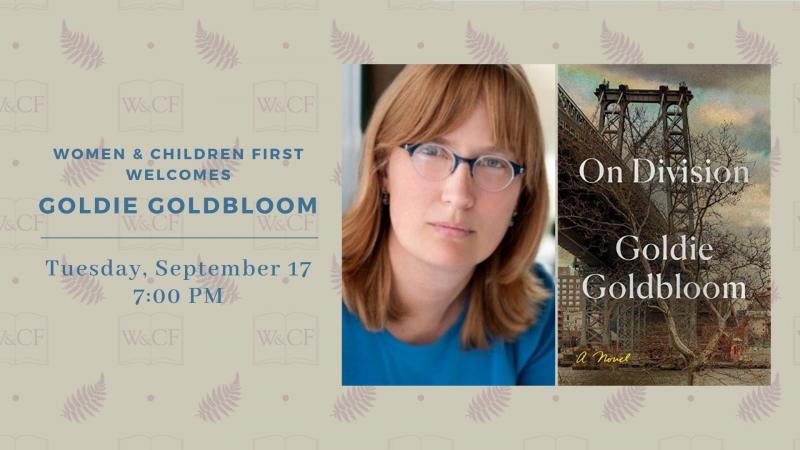 Join us as we celebrate the launch of On Division, the highly anticipated new novel from Goldie Goldbloom. For this event, Goldie will be in conversation with author and artist Riva Lehrer.

In Williamsburg, Brooklyn, just a block or two up from the East River on Division Avenue, Surie Eckstein is soon to be a great-grandmother. Her ten children range in age from thirteen to thirty-nine. Her in-laws, postwar immigrants from Romania, live on the first floor of their house. Her daughter Tzila Ruchel lives on the second. She and Yidel, a scribe in such demand that he makes only a few Torah scrolls a year, live on the third. Wed when Surie was sixteen, they have a happy marriage and a full life, and, at the ages of fifty-seven and sixty-two, they are looking forward to some quiet time together.

Into this life of counted blessings comes a surprise. Surie is pregnant. Pregnant at fifty-seven. It is a shock. And at her age, at this stage, it is an aberration, a shift in the proper order of things, and a public display of private life. She feels exposed, ashamed. She is unable to share the news, even with her husband. And so for the first time in her life, she has a secret—a secret that slowly separates her from the community.

Goldie Goldbloom's On Division is an excavation of one woman's life, a story of awakening at middle age, and a thoughtful examination of the dynamics of self and collective identity. It is a steady-eyed look inside insular communities that also celebrates their comforts. It is a rare portrait of a long, happy marriage. And it is an unforgettable new novel from a writer whose imagination is matched only by the depth of her humanity.

Goldie Goldbloom’s first novel, The Paperbark Shoe, won the AWP Prize, was named the Literary Novel of the Year by Foreward Magazine and is an NEA Big Reads selection. She was awarded a National Endowment for the Arts Fellowship, and has been the recipient of multiple grants and awards, including fellowships from Warren Wilson, Northwestern University, the Brown Foundation, the City of Chicago and the Elizabeth George Foundation. She is chassidic and the mother of eight children.

Riva Lehrer is an artist, writer and curator who focuses on the socially challenged body. She is best known for representations of people with impairments, and those whose sexuality or gender identity have long been stigmatized. Ms. Lehrer’s work has been seen in venues including the National Portrait Gallery of the Smithsonian, Yale University, the United Nations, the National Museum of Women in the Arts in Washington, DC, the Arnot Museum, the DeCordova Museum, the Frye Museum, the Chicago Cultural Center, and the State of Illinois Museum. Awards include the 2017 3Arts MacDowell Fellowship for writing, 2015 3Arts Residency Fellowship at the University of Illinois; the 2014 Carnegie Mellon Fellowship at Haverford and Bryn Mawr Colleges; the 2009 Prairie Fellowship at the Ragdale Foundation. Grants include the 2009 Critical Fierceness Grant, the 2008 3Arts Foundation Grant, and the 2006 Wynn Newhouse Award for Excellence, (NYC), as well as grants from the Illinois Arts Council, the University of Illinois, and the National Endowment for the Arts. Her memoir, Golem Girl, will be published by the One World imprint of Penguin/Random House, in 2020. Ms. Lehrer is represented by Regal Hoffman & Associates literary agency, NYC. Ms. Lehrer is on faculty at the School of the Art Institute of Chicago, and instructor in the Medical Humanities Departments of Northwestern University.

On Division: A Novel (Hardcover)