Book Launch Party: Fag Hags, Divas and Moms: The Legacy of Straight Women in the AIDS Community by Victoria Noe 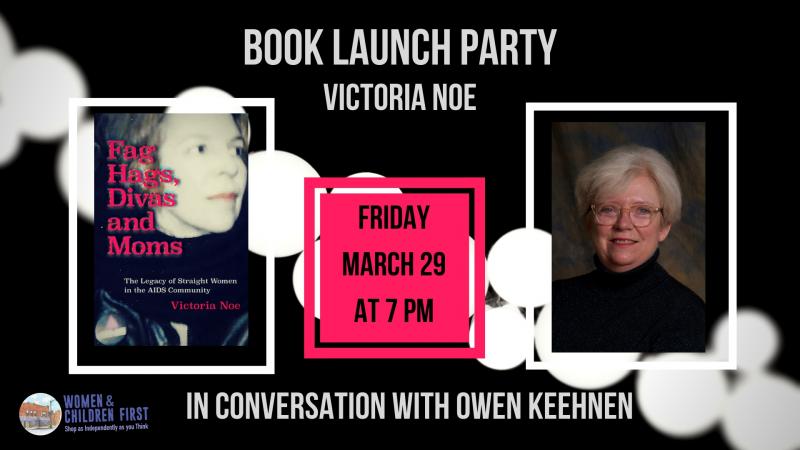 Join us as we celebrate the launch of the new book from Victoria Noe! For this event, Victoria will be in conversation with Owen Keehnen.

When most people think of straight women and the AIDS epidemic, only Elizabeth Taylor and Princess Diana come to mind. But there were many more. Fag Hags, Divas and Moms: The Legacy of Straight Women in the AIDS Community fills a gap in the history of the epidemic and in women's history as well. A mix of personal interviews and archival research, the contributions of straight women around the world--not just as caregivers, but activists, researchers and leaders--are recognized for the first time.

Victoria Noe is a Chicago author, speaker and activist. Her award-winning Friend Grief series, inspired by the death of a friend, focused on a type of grief that was given little respect. She was a fundraiser in the AIDS community of Chicago in the late 1980s and early 1990s, and has been a member of ACT UP/NY since 2013.

Owen Keehnen is a grassroots historian and the author of several fiction and non-fiction titles, including the recent release Dugan’s Bistro and the Legend of the Bearded Lady. He is the co-founder of the Legacy Project, a history/education organization focused on reclaiming and celebrating the LGBTQ past. He was inducted into the Chicago LGBT  Hall of Fame in 2011.

*Please note that from March 29 through April 30, Victoria will donate $1 from the sale of each copy of Fag Hags, Divas and Moms purchased through Women & Children First to our non-profit arm the Women's Voices Fund*

Fag Hags, Divas and Moms: The Legacy of Straight Women in the AIDS Community (Paperback)