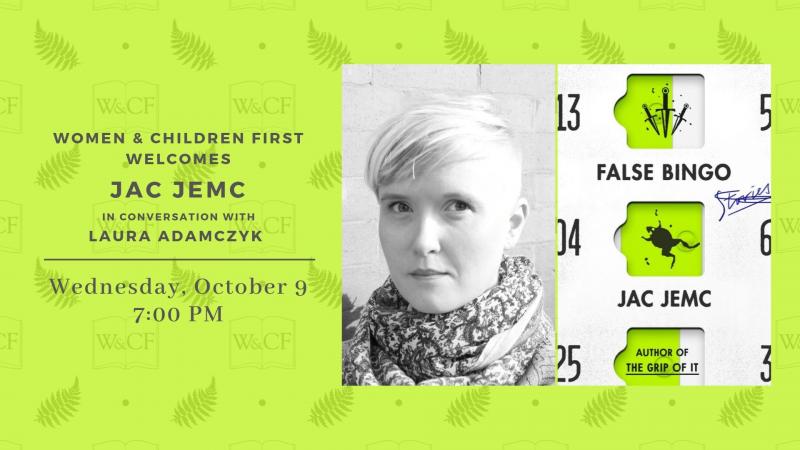 Please join us for the celebration of False Bingo, the new story collection by Jac Jemc. For this event, Jac will be in conversation with Laura Adamczyk.

Register for free for this event HERE. Registration is encouraged but not required.

In Jac Jemc’s dislocating second story collection, False Bingo, we watch as sinister forces—some supernatural, some of this earth, some real and some not—work their ways into the mundanity of everyday life.

In “Strange Loop,” an outcast attempting to escape an unnamed mistake spends his days taxiderming animals, while in “Delivery,” a family watches as their dementia-addled, basement-dwelling father succumbs to an online shopping addiction. “Don’t Let’s” finds a woman, recently freed from an abusive relationship, living in an isolated vacation home in the South that might be haunted by breath-stealing ghosts.

Fueled by paranoia and visceral suspense, and crafted with masterful restraint, these seventeen stories explore what happens when our fears cross over into the real, if only for a fleeting moment. Identities are stolen, alternate universes are revealed, and innocence is lost as the consequences of minor, seemingly harmless decisions erupt to sabotage a false sense of stability. “This is not a morality tale about the goodness of one character triumphing over the bad of another,” the sadistic narrator of “Pastoral” announces. Rather, False Bingo is a collection of realist fables exploring how conflicting moralities can coexist: the good, the bad, the indecipherable.

Jac Jemc is the author of My Only Wife, a finalist for the 2013 PEN / Robert W. Bingham Prize for Debut Fiction and winner of the Paula Anderson Book Award, and A Different Bed Every Time. She has been the recipient of two Illinois Arts Council Professional Development Grants, and in 2014 was named one of 25 Writers to Watch by the Guild Literary Complex and one of Newcity’s Lit 50 in Chicago. She recently completed a stint as the writer in residence at the University of Notre Dame and currently teaches at Northeastern Illinois University and StoryStudio Chicago, as well as online at Writers & Books and the Loft Literary Center, and she is the web nonfiction editor for Hobart.

Laura Adamczyk’s fiction has won awards from the Union League Civic & Arts Foundation of Chicago and has appeared in Hobart, Chicago Reader, PANK, and Bellevue Literary Review, among others. Her debut book is the story collection Hardly Children. Her story “Girls,” published in Guernica, won the 2014 Dzanc Books / Disquiet International Literary Program Award. She works at The A.V. Club in Chicago.