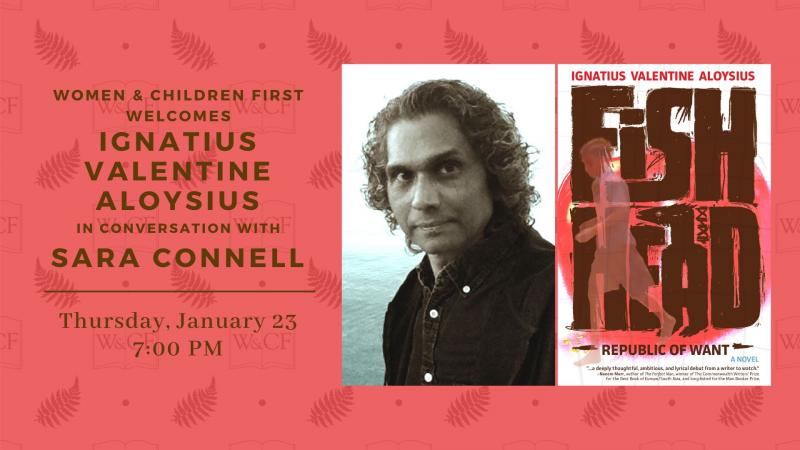 Please join us for the launch celebration of Fishhead. Republic of Want, a novel by local author Ignatius Valentine Aloysius. For this event, Ignatius will be in conversation with local author Sarah Connell.

Amidst the teeming tenements of 1970s Bombay (Mumbai), a hungry teenage boy struggles through life in a poverty-stricken family ruled by a domineering alcoholic father, when suddenly he faces another challenge: the affections of an upper middle class girl. In this exploration of poverty and pleasure, patriarchy and tragedy, Fishhead’s titular narrator must search for ways to bridge the gap between two seemingly irreconcilable worlds: the life he longs to live, and the one chosen for him by Destiny.

Ignatius Valentine Aloysius earned his MFA in Creative Writing from Northwestern University’s School of Professional Studies. Born and raised in India, he is a naturalized U.S. citizen and lives in Evanston with his wife. Ignatius is a lecturer, designer, and musician. His writing has appeared in Triquarterly, Third Coast Review, Newcity, The Sunday Rumpus and other venues. He is a co-curator of Sunday Salon Chicago, a bi-monthly reading series in Chicago, and serves on the curatorial board at Ragdale.

As an author and coach, Sara Connell has been featured on The Oprah Winfrey Show, Good Morning America, The View, FOX Chicago, NPR, and Katie Couric. Her writing has appeared in local and national publications including Forbes, The New York Times, and Good Housekeeping. Her first book Bringing in Finn was nominated for ELLE magazine 2012 Book of the Year.