Book Launch Party: THE FOURTEENTH OF SEPTEMBER by Rita Dragonette 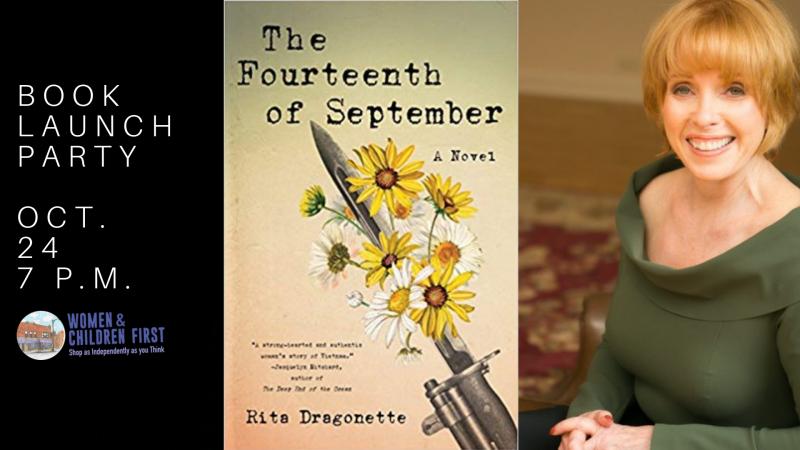 For this book launch celebration, Rita Dragonette will be interviewed by Mary Ann Childers!

On September 14, 1969, Private First Class Judy Talton celebrates her nineteenth birthday by secretly joining the campus anti-Vietnam War movement. In doing so, she jeopardizes both the army scholarship that will secure her future and her relationship with her military family. But Judy's doubts have escalated with the travesties of the war. Who is she if she stays in the army? What is she if she leaves? When the first date pulled in the Draft Lottery turns up as her birthday, she realizes that if she were a man, she'd have been Number One--off to Vietnam with an under-fire life expectancy of six seconds. The stakes become clear, propelling her toward a life-altering choice as fateful as that of any draftee. The Fourteenth of September portrays a pivotal time at the peak of the Vietnam War through the perspective of a young woman, tracing her path of self-discovery and a coming of conscience. Judy's story speaks to the poignant clash of young adulthood, early feminism, and war, offering an ageless inquiry into the domestic politics of protest when the world stops making sense.

Rita Dragonette is a former award-winning public relations executive turned author. Her debut novel, The Fourteenth of September, has already been designated a finalist in two 2018 American Fiction Awards by American Book Fest, and received an honorable mention in the Hollywood Book Festival. She is currently working on two other novels and a memoir in essays, all of which are based upon her interest in the effect of war on and through women.

Mary Ann Childers is one of the most recognized and respected voices in Chicago broadcasting. As an Emmy Award-winning anchor and reporter at ABC and CBS-owned stations, she reported virtually every major regional news story for more than 20 years. She currently serves as senior consultant to the prominent public affairs firm Res Publica Group. Mary Ann lives in Chicago and is married to CBS2 Special Correspondent Jay Levine.

The Fourteenth of September (Paperback)