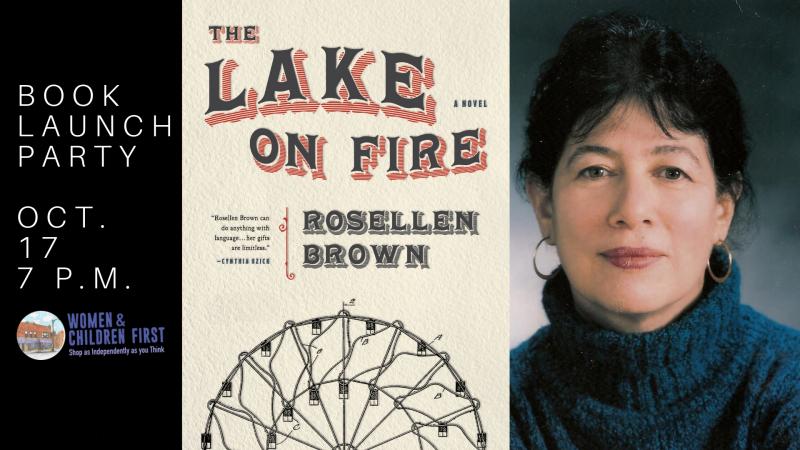 The Lake on Fire begins among 19th century Jewish immigrants on a failing Wisconsin farm. Dazzled by lore of the American dream, Chaya and her strange, brilliant, young brother Asher stow away to Chicago; what they discover there, however, is a Gilded Age as empty a facade as the beautiful Columbian Exposition luring thousands to Lake Michigan's shore. The pair scrapes together a meager living--Chaya in a cigar factory; Asher, roaming the city and stealing books and jewelry to share with the poor, until they find different paths of escape. The Lake on Fire is robust, gleaming, and grimy all at once, proving that celebrated author Rosellen Brown is back with a story as luminous as ever.

Rosellen Brown is the author of the novels Civil Wars, Half a Heart, Tender Mercies, Before and After, and six other books. Her stories have appeared frequently in O. Henry Prize Stories, Best American Short Stories, and Best Short Stories of the Century. She now teaches in the MFA in Writing Program at the School of the Art Institute of Chicago.

Janet Burroway, awarded the Florida Humanities Council's 2014 Lifetime Achievement Award in Writing, is the author of eight novels as well as short fiction, plays, poetry, essays, texts for dance, and children's books. Her Writing Fiction: A Guide to Narrative Craft (ninth edition), is the most widely used creative writing text in America, and her multi-genre Imaginative Writing is out in a fourth edition. Her most recent novel is Bridge of Sand and her memoir Losing Tim was published in 2014. Her play Parts of Speech won the Br!nk award at the Renaissance Theatreworks, Milwaukee in 2015 and Boomerang, a modern female Lear, was commissioned by Sideshow Theatre Company, also in 2015.

This event is co-sponsored by the Guild Literary Complex, a nonprofit bringing together the varied voices of Chicago and the world through innovative and integrative programming highlighting the intersections of marginality, the power of community, the impact of arts and activism, with a mission of social justice and literary arts for all. The Guild has been serving Chicago’s 50 wards since 1989.

The Lake on Fire (Paperback)