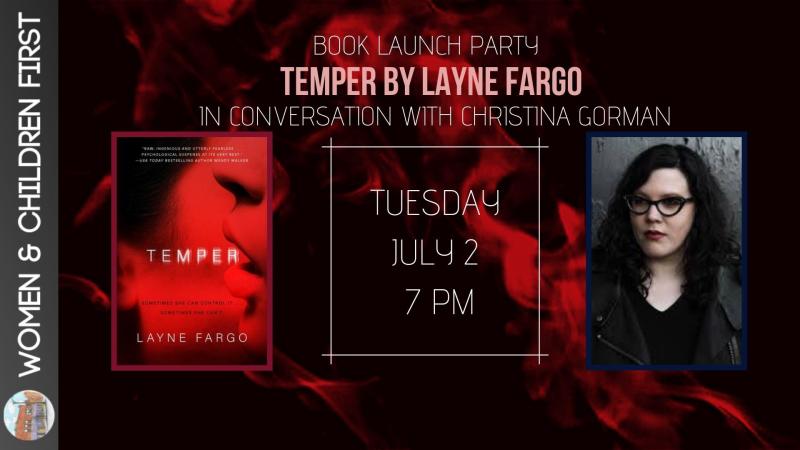 Join us as we celebrate the release of local author Layne Fargo's debut novel, Temper. For this event, Layne will be in conversation with actor Christina Gorman.

After years of struggling in the Chicago theater scene, ambitious actress Kira Rascher finally lands the role of a lifetime. But starring in Temper means working with Malcolm Mercer, a mercurial director who’s known for pushing his performers past their limits—onstage and off. Kira’s convinced she can handle Malcolm, but the theater’s cofounder Joanna Cuyler is another story. Clearly Joanna sees Kira as a threat. But as opening night draws near, it becomes clear that Malcolm’s dangerous extremes are nothing compared to what they're capable of themselves. An edgy, addictive, and fiendishly clever tale of ambition, deceit, and power, Temper is a timely, heart-in-your-throat psychological thriller that will leave you breathless.

Layne Fargo has a background in theater and library science. She’s a Pitch Wars mentor, a member of the Chicagoland chapter of Sisters in Crime, and the co-creator of the podcast Unlikeable Female Characters. Layne lives in Chicago with her partner and their pets.

Christina Gorman is an actor and fight/intimacy choreographer, originally from the Hudson Valley region of upstate New York. As a choreographer she has worked with such companies as Steppenwolf Theatre, A Red Orchid Theatre, Northlight Theatre, Steep Theatre, and her artistic home Shattered Globe Theatre, among others. She also teaches acting and stage combat to adults and teens at Acting Studio Chicago and is represented by Actors Talent Group.