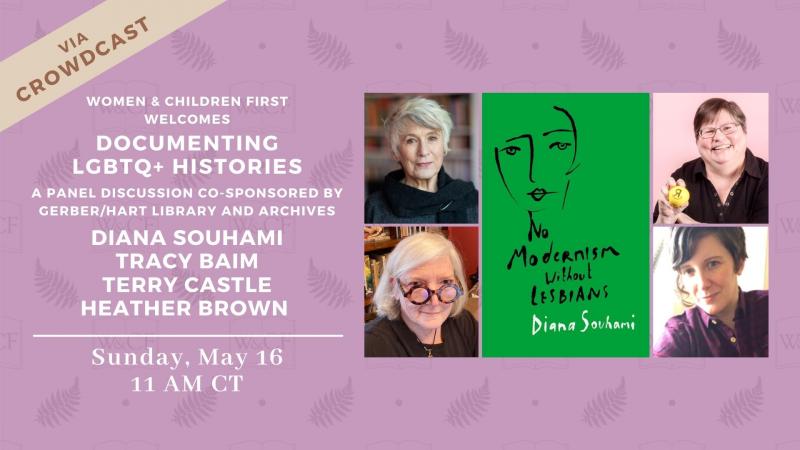 Join us for a morning panel discussion on Women & Children First's Crowdcast Channel, "Documenting LGBTQ+ Histories." This event will celebrate the release of No Modernism Without Lesbians by Diana Souhami. For this event, Souhami will be joined by Tracy Baim and Terry Castle for a conversation moderated by Heather Brown. This event is co-sponsored by Gerber/Hart Library and Archives.

Tracy Baim is publisher of the Chicago Reader. She has been inducted into the National LGBT Journalists Association Hall of Fame, Association of Women Journalists-Chicago Hall of Fame, and the Chicago LGBT Hall of Fame. She received a Lifetime Achievement Award from the Society of Professional Journalists-Chicago. Baim, a working journalist in Chicago since 1984, is also owner and co-founder of Windy City Times, a 34-year-old LGBTQ newspaper. She is the author or co-author of 12 books on LGBTQ history (including Out and Proud in Chicago, Obama and the Gays, Gay Press, Gay Power, and also biographies of Barbara Gittings, Vernita Gray, Chuck Renslow, and Jim Flint), producer of four films, creator of the That’s So Gay! LGBTQ trivia game, and a longtime journalist and organizer. Major events she has helped lead include Gay Games VII in Chicago in 2006 and the March on Springfield for Marriage Equality in 2013. She founded the LGBT Chamber of Commerce in 1996, and has won numerous awards for her journalism and activism, including the Studs Terkel Award and Peter Lisagor Awards.

Heather Brown lives in Andersonville and is a volunteer curator at the Gerber/Hart Library and Archives. She holds a PhD in English from the University of Maryland and works as an academic writing instructor and learning designer in higher education.

The writer and critic Terry Castle–described by the late Susan Sontag as “the most expressive, most enlightening literary critic at large today”– has taught at Stanford University since 1983 and is the Walter A. Haas Professor in the Humanities. Her scholarly interests include eighteenth-century British fiction, the Gothic novel, Jane Austen, the First World War, English art and culture of the 1920s and 1930s, autobiography and biography, and LGBTQ writing. She has published eight books on diverse subjects, including Masquerade and Civilization (1986), The Apparitional Lesbian (1993), and the prize-winning collection, The Literature of Lesbianism: A Historical Anthology from Ariosto to Stonewall(2003). She is also a well-known essayist and has written frequently for the London Review of Books, Atlantic, New Republic, Times Literary Supplement, New York Times Book Review, and other periodicals. Her widely-reviewed collection of autobiographical essays, The Professor: A Sentimental Education, appeared in 2010. In her spare time, she is a visual artist, a collector of contemporary art, vintage photography, rare books and old postcards, and a Mexican Street Dog enthusiast. She lives in San Francisco.

Diana Souhami is the author of Gluck: Her Biography, Gertrude and Alice, Greta and Cecil, The Trials of Radclyffe Hall (shortlisted for the James Tait Black Prize for Biography and winner of the US Lambda Literary Award), Wild Girls, the bestselling Mrs Keppel and Her Daughter (also winner of the Lambda Literary Award and a New York Times ‘Notable Book of the Year’), Selkirk’s Island (winner of the Whitbread Biography award), Coconut Chaos, Edith Cavell (winner of the EDP Jarrold East Anglian Book of the Year Award), Murder at Wrotham Hill (shortlisted for the Crime Writers’ Association Gold Dagger for. Non-Fiction) and the novel Gwendolen. She is a Rainbow List National Treasure and she lives in London.

Gerber/Hart is an LGBTQ library and archives located in the Rogers Park neighborhood in Chicago. Founded in 1981, Gerber/Hart Library and Archives seeks to preserve and make accessible the history and culture of the LGBTQ communities in Chicago and the Midwest in order to advance the larger goal of achieving justice and equality.

No Modernism Without Lesbians (Paperback)