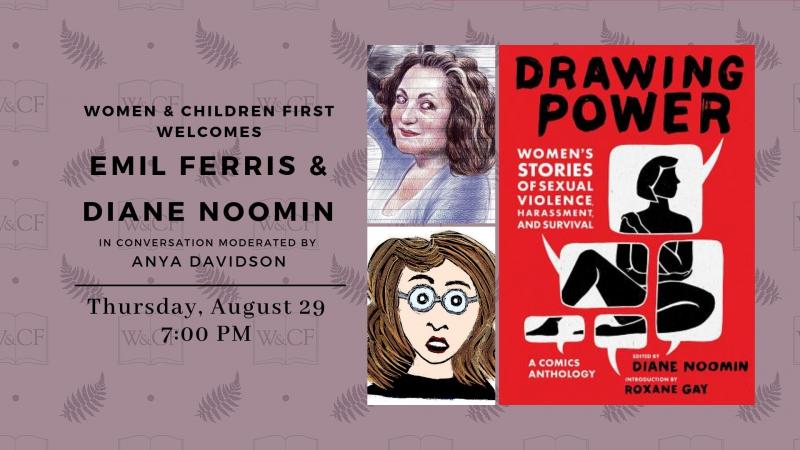 Join us for a conversation with Emil Ferris & Diane Noomin moderated by Anya Davidson in honor of the new anthology, Drawing Power: Women's Stories of Sexual Violence, Harassment, and Survival.

Inspired by the global #MeToo Movement, Drawing Power is a collection of original, nonfiction comics drawn by more than 60 female cartoonists from around the world. The anthology’s contributors comprise a diverse group of many ages, sexual orientations, and races—and their personal stories convey the wide spectrum of sexual harassment and abuse that is still all too commonplace. With a percentage of profits going to RAINN, Drawing Power is an anthology that stokes the fires of progressive social upheaval, in the fight for a better, safer world.

Diane Noomin is the creator of the comics character DiDi Glitz, editor of the Twisted Sisters anthologies, and was one of the early contributors to Wimmen’s Comix. She has been nominated for Harvey and Eisner Awards and received an Inkpot Award.

Emil Ferris grew up in Chicago. She has an MFA from the Art Institute of Chicago. In a previous life, Ferris was an illustrator and toy sculptor for a diverse range of clients. In 2010, Ferris was made a Toby Devan Lewis Fellow in the Visual Arts. My Favorite Thing Is Monsters is Emil's first, but not last, graphic novel.