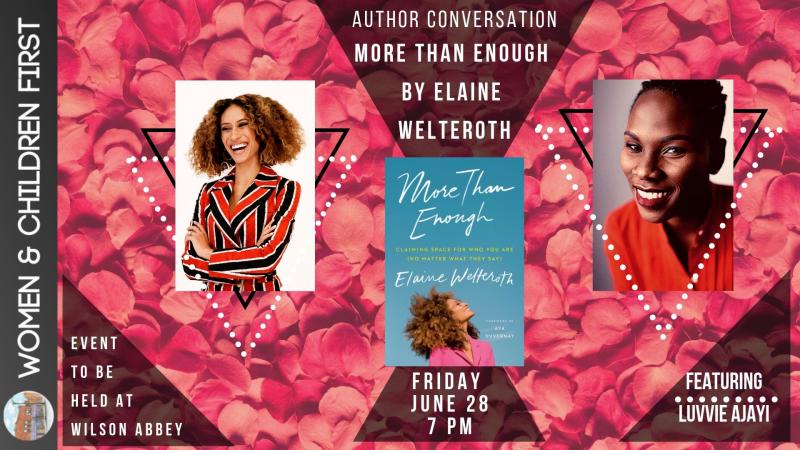 Women & Children First is honored to host an evening with New York Times bestselling author Elaine Welteroth in celebration of her new book, MORE THAN ENOUGH: Claiming Space for Who You Are (No Matter What They Say). This event will be held at Wilson Abbey (935 W. Wilson). For this event, Elaine will be in conversation with Luvvie Ajayi.

Each ticket includes a copy of MORE THAN ENOUGH by Elaine Welteroth, which attendees will pick up at the event. Elaine will be joined by a very special guest, to be announced shortly.

Throughout her life, Elaine Welteroth has climbed the ranks of media and fashion, shattering ceilings along the way. In this riveting and timely memoir, the groundbreaking journalist unpacks lessons on race, identity, and success through her own journey, from navigating her way as the unstoppable child of a unlikely interracial marriage in small-town California to finding herself on the frontlines of a modern movement for the next generation of change makers.

Welteroth moves beyond the headlines and highlight reels to share the profound lessons and struggles of being a barrier-breaker across so many intersections. As a young boss and the only black woman in the room, she's had enough of the world telling her--and all women--they're not enough. As she learns to rely on herself by looking both inward and upward, we're ultimately reminded that we're more than enough.

Elaine Welteroth is an award-winning journalist, author, and judge on the new Project Runway. She was most recently editor-in-chief of Teen Vogue where she in 2017 became the youngest person ever appointed editor-in-chief and in 2012 had been the first African American ever to hold the post of beauty and health director at a Condé Nast publication. Prior to Teen Vogue, she was the senior beauty editor at Glamour and the beauty and style editor at Ebony. She's now a leading expert and advocate for the next generation of change-makers. She has written for the hit show Grown-ish and has appeared on-camera for a range of media outlets including ABC News and Netflix. She lives in Brooklyn, New York.

Luvvie Ajayi is an award-winning author, speaker and digital strategist thriving at the intersection of comedy, technology and activism. Her debut book, IM JUDGING YOU: The Do-Better Manual was an instant New York Times best-seller. The 16-year blogging veteran covers all things pop culture at AwesomelyLuvvie.com. On her podcast, Rants & Randomness, she shares her most pressing rants, raves and faves and interviews interesting guests. Luvvie is a sought-after speaker who has spoken at places like the White House, MAKERS Conference, andS XSW. She has interviewed bosses like Oprah Winfrey, Geena Davis and Shonda Rhimes. Luvvie is committed to using her voice for pop culture critique and gender and racial justice.

Tickets are non-refundable. If you purchase a ticket and are unable to attend, you'll have 30 days after the event to pick up your copy of MORE THAN ENOUGH. Proof of ticket purchase required.

More Than Enough: Claiming Space for Who You Are (No Matter What They Say) (Hardcover)