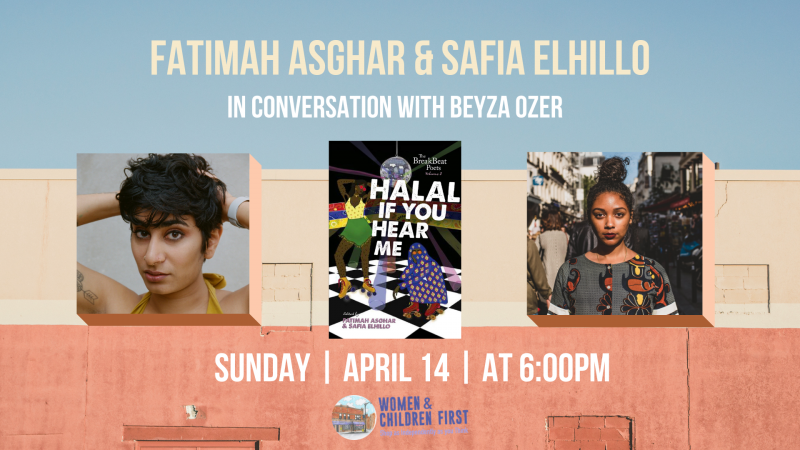 Please help us celebrate the release of the BreakBeat Poets Volume 3: Halal If You Me. Joining us will be editors Fatimah Asghar and Safia Elhillo in conversation with beyza ozer, whose work is featured in the anthology.

Fatimah Asghar is a nationally touring poet, performer, educator, and writer. Her work has appeared in POETRY Magazine, BuzzFeed Reader, Academy of American Poets and has been featured on news outlets like PBS, TIME, NBC, Teen Vogue, and Huffington Post. In 2011, she created REFLEKS, a Spoken Word Poetry group in Bosnia and Herzegovina while on a Fulbright studying theater in post-genocidal countries. She is a member of the Dark Noise collective and a Kundiman Fellow. Her chapbook After was released on Yes Yes Books fall 2015. She is the writer of Brown Girls, an Emmy-nominated web series that highlights a friendship between women of color. In 2017 she was the recipient of a Ruth Lilly and Dorothy Sargent Rosenberg Fellowship from the Poetry Foundation and was on the Forbes 30 Under 30 list. Her debut collection of poems is If They Come For Us.

Safia Elhillo is the author of The January Children (University of Nebraska Press, 2017). Sudanese by way of Washington, DC, and a Cave Canem fellow, she holds an MFA from the New School. Safia received the 2015 Brunel International African Poetry Prize and the 2016 Sillerman First Book Prize for African Poets. She is a 2018 recipient of the Ruth Lilly and Dorothy Sargent Rosenberg Poetry Fellowship. In addition to appearing in journals and anthologies, her work has been translated into Arabic, Japanese, Estonian, Portuguese, and Greek, and commissioned by Under Armour and the Bavarian State Ballet. With Fatimah Asghar, she is co-editor of the anthology “Halal If You Hear Me” (Haymarket Books, 2019).

beyza ozer is a queer/trans/Muslim person living in Chicago. beyza's work has appeared in & is forthcoming from The Offing, Vinyl, & the anthologies Subject To Change: Trans Poetry & Conversation (Sibling Rivalry Press 2017) & Halal If You Hear Me (Haymarket 2019). beyza is the author of FAIL BETTER (fog machine press 2017) & they are a recipient of the Windy City Times 30 Under 30 Award. beyza is deputy director of social media of YesYes Books & manuscript editor at Critical Inquiry.

Our store is wheelchair accessible, however our bathrooms are not--there is a narrow hallway and sharp 90-degree turn on the way to our bathrooms. Seating is first-come, first-served, but we are happy to reserve seats for people with disabilities. Please call the store at 773-769-9299 the day of the event if you need a reserved seat or have additional questions.

The Breakbeat Poets Vol. 3: Halal If You Hear Me (Paperback)