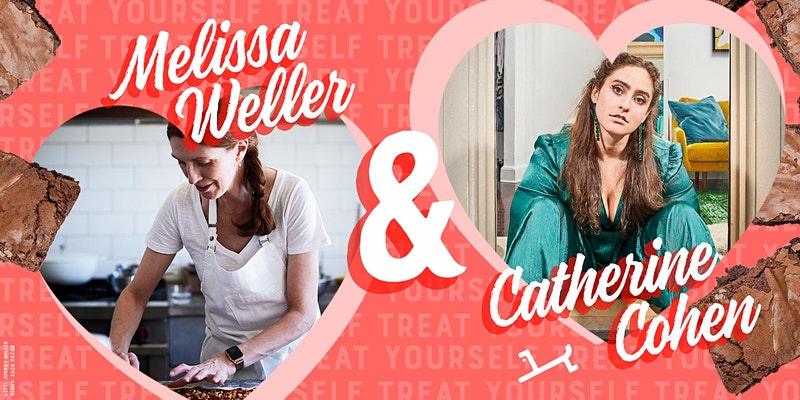 Treat Yourself this Galentine's Day with Catherine Cohen, Melissa Weller, and Meg Stalter!

Can't see your friends for candy, booze, and love this Galentine's Day? Take it virtual, and join Catherine Cohen & Melissa Weller in a bake-a-long hang-a-long! Catherine & Melissa will be making Melissa's famous fudgy brownies, and the two authors will be joined by none other than comedian extraordinaire and special guest Meg Stalter! Zoom with your Galentines, put on your sweats, and crack open a bottle of wine (yes, a bottle) -- there will be laughs, chocolate, poetry, and baking -- as far as Zoom events go, this one will be pretty fun.

Virtual doors open at 2:45 pm CT, and we'll get started at 3:00 pm CT. Don't forget to pre-heat those ovens for the brownie demo (or bring the whole pan + fork to the couch, if you made them in advance)!

We're excited to be co-hosting this event with Knopf.

Melissa Weller received a James Beard Award nomination for Outstanding Baker in 2016. A French Culinary Institute graduate, she trained at Babbo and Sullivan Street Bakery in New York City. She was chef-partner at High Street on Hudson; head baker at Per Se, Bouchon Bakery, and Roberta's; an owner and founder of Sadelle's; and the head baker at Walnut Street Café in Philadelphia. She lives in Brooklyn.

God I Feel Modern Tonight: Poems from a Gal About Town (Hardcover)

A Good Bake: The Art and Science of Making Perfect Pastries, Cakes, Cookies, Pies, and Breads at Home: A Cookbook (Hardcover)