GOOD AND MAD: THE REVOLUTIONARY POWER OF WOMEN'S ANGER 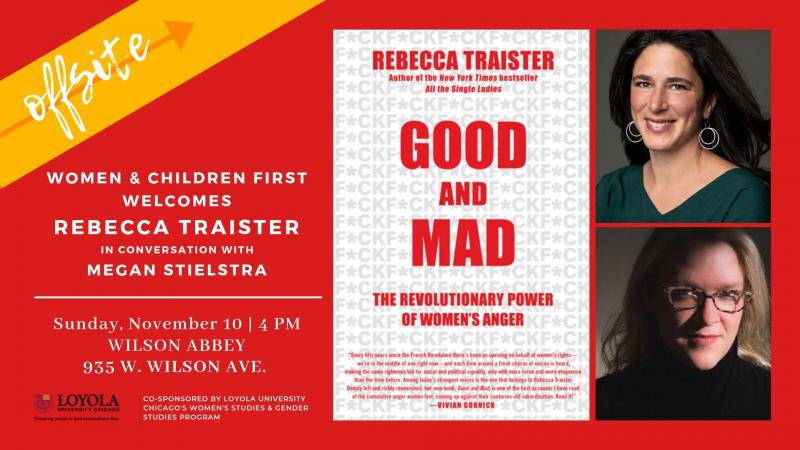 Women & Children First in partnership with Loyola University Chicago's Women's Studies & Gender Studies Program is thrilled to welcome Rebecca Traister to Chicago for a conversation with Megan Stielstra about Traister's most recent book, GOOD AND MAD: THE REVOLUTIONARY POWER OF WOMEN'S ANGER--new in paperback!

This event will be held at Wilson Abbey (935 W. Wilson Ave.). This event is co-sponsored by Loyola Unviersity Chicago's Women's Studies & Gender Studies program, which is celebrating its 40th anniversary this year alongside Women & Children First.

*Attendees must have a copy of GOOD AND MAD in order to join the book signing line. If you purchase a book with your ticket, you will pick up your copy at the event.*

*Loyola Students can sign up for this event for free HERE. Be sure to bring your student ID to the event to check-in*

From Rebecca Traister, the New York Times bestselling author of All the Single Ladies comes a vital, incisive exploration into the transformative power of female anger and its ability to transcend into a political movement.

In the year 2018, it seems as if womens anger has suddenly erupted into the public conversation. But long before Pantsuit Nation, before the Women's March, and before the #MeToo movement, women's anger was not only politically catalyticbut politically problematic. The story of female fury and its cultural significance demonstrates the long history of bitter resentment that has enshrouded women's slow rise to political power in America, as well as the ways that anger is received when it comes from women as opposed to when it comes from men.

With eloquence and fervor, Rebecca tracks the history of female anger as political fuel from suffragettes marching on the White House to office workers vacating their buildings after Clarence Thomas was confirmed to the Supreme Court. Here Traister explores womens anger at both men and other women; anger between ideological allies and foes; the varied ways anger is perceived based on its owner; as well as the history of caricaturing and delegitimizing female anger; and the way womens collective fury has become transformative political fuelas is most certainly occurring today. She deconstructs societys (and the medias) condemnation of female emotion (notably, rage) and the impact of their resulting repercussions.

Rebecca Traister is writer at large for New York magazine and a contributing editor at Elle. A National Magazine Award finalist, she has written about women in politics, media, and entertainment from a feminist perspective for The New Republic and Salon and has also contributed to The Nation, The New York Observer, The New York Times, The Washington Post, Vogue, Glamour and Marie Claire. She is the author of All the Single Ladies and the award-winning Big Girls Dont Cry. She lives in New York with her family.

Megan Stielstra is the author of three collections: The Wrong Way To Save Your Life, Once I Was Cool, and Everyone Remain Calm. Her work appears in the Best American Essays, New York Times, Chicago Tribune, Chicago Reader, Poets & Writers, The Believer, Longreads, Tin House, Guernica, Catapult, LitHub, Buzzfeed Reader, The Rumpus, and elsewhere. A longtime company member with 2nd Story, she has told stories for National Public Radio, Radio National Australia, Museum of Contemporary Art, Goodman Theatre, and regularly with The Paper Machete live news magazine at The Green Mill. She teaches creative nonfiction at Northwestern University.

Tickets are non-refundable. If you purchase a book with your ticket, you'll have 30 days to pick up your copy of GOOD AND MAD at Women & Children First (5233 N. Clark St.).

Good and Mad: The Revolutionary Power of Women's Anger (Paperback)