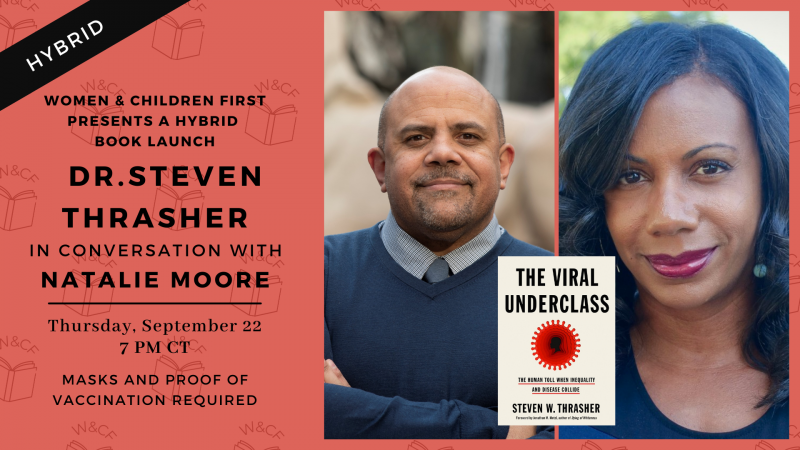 Join us for an in-person reading, conversation, and book-signing with Dr. Steven Thrasher. For this event, Thrasher will be joined in conversation by Natalie Moore.

Please note: proof of vaccination and masks worn throughout the event are required for all attendees. This event will be recorded and streamed via W&CF's YouTube Channel. We will also email a link to the recording after the event to everyone who registered.

"An irresistibly readable and humane exploration of the barbarities of class...readers are gifted that most precious of things in these muddled times: a clear lens through which to see the world."
—Naomi Klein, New York Times bestselling author of This Changes Everything and The Shock Doctrine

From preeminent LGBTQ scholar, social critic, and journalist Steven W. Thrasher comes a powerful and crucial exploration of one of the most pressing issues of our times: how viruses expose the fault lines of society.

Having spent a ground-breaking career studying the racialization, policing, and criminalization of HIV, Dr. Thrasher has come to understand a deeper truth at the heart of our society: that there are vast inequalities in who is able to survive viruses and that the ways in which viruses spread, kill, and take their toll are much more dependent on social structures than they are on biology alone.

Told through the heart-rending stories of friends, activists, and teachers navigating the novel coronavirus, HIV, and other viruses, Dr. Thrasher brings the reader with him as he delves into the viral underclass and lays bare its inner workings. In the tradition of Isabel Wilkerson’s Caste and Michelle Alexander’s The New Jim Crow, The Viral Underclass helps us understand the world more deeply by showing the fraught relationship between privilege and survival.

STEVEN W. THRASHER, PHD holds the inaugural Daniel H. Renberg chair at Northwestern University’s Medill School, the first journalism professorship in the world created to focus on LGBTQ research. He is also a faculty member of Northwestern’s Institute of Sexual and Gender Minority Health and Wellbeing. A columnist for Scientific American, his writing has been widely published by The New York Times, Nation, The Atlantic, Journal of American History, BuzzFeed News, Esquire and New York. In 2019, Out magazine named him one of the 100 most influential and impactful people of the year, and the Ford Foundation awarded him a grant for Creativity and Free Expression. An alumnus of media jobs with Saturday Night Live, the HBO film The Laramie Project and the NPR StoryCorps project, Dr. Thrasher has also been a staff writer for The Village Voice and a columnist for The Guardian. He holds a PhD in American Studies and divides his time between Chicago and New York. The Viral Underclass is his first book.

NATALIE Y. MOORE covers segregation and inequality. Her work has been broadcast on the BBC, Marketplace, and NPR’s Morning Edition, All Things Considered and Weekend Edition. Natalie is the author of The South Side: A Portrait of Chicago and American Segregation, winner of the 2016 Chicago Review of Books award for nonfiction and a Buzzfeed best nonfiction book of 2016. She is also co-author of The Almighty Black P Stone Nation: The Rise, Fall and Resurgence of an American Gang and Deconstructing Tyrone: A New Look at Black Masculinity in the Hip-Hop Generation. She is also the author of “The Billboard,” a play about abortion. Natalie writes a monthly column for the Chicago Sun-Times. Her work has been published in Essence, Ebony, In These Times, the Chicago Tribune, the New York Times, the Washington Post and the Guardian. She is the 2017 recipient of Chicago Library Foundation’s 21st Century Award. In 2010, she received the Studs Terkel Community Media Award for reporting on Chicago’s diverse neighborhoods. She is a 2021 USA Fellow. The Pulitzer Center named her a 2020 Richard C. Longworth Media Fellow for international reporting. In 2021, University of Chicago Center for Effective Government (CEG), based at the University of Chicago Harris School of Public Policy, welcomed her its first cohort of Senior Practitioner Fellows.

The Viral Underclass: The Human Toll When Inequality and Disease Collide (Hardcover)