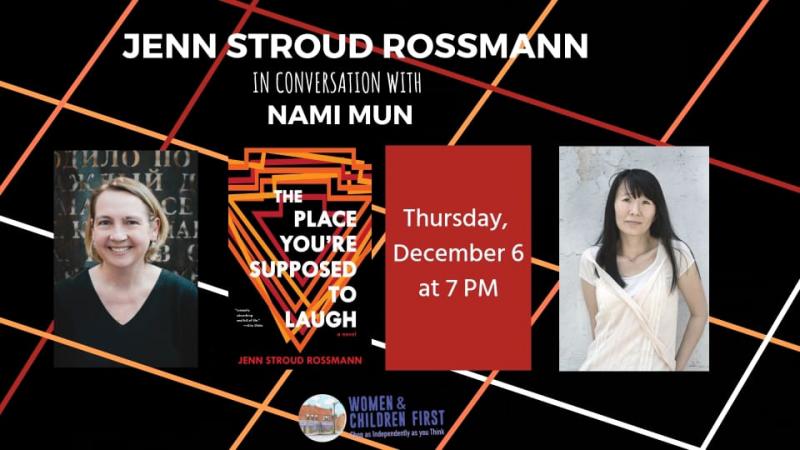 It's 2002 in Silicon Valley. 9/11's still fresh, the dot-com bubble has burst, and holy calamity is raining down on 14-year-old Chad Loudermilk. His father is about to lose his job, his mother isn't the same since Chad's grandma died, and as one of the few black kids at tony Palo Alto High School, Chad's starting to wonder about his birth parents. Next door lives dot-com mogul Scot MacAvoy, with his luxury SUV and his gardeners and his beautiful wife and his time to play video games with Chad, all making the Loudermilk family's struggle to stay afloat seem that much harder. It's going to be a tough year for the Loudermilks.

Jenn Stroud Rossmann writes the essay series An Engineer Reads a Novel for Public Books. The Place You're Supposed to Laugh is her debut novel. Her stories have appeared in Hobart, Literary Orphans, Jellyfish Review, Tahoma Literary Review, failbetter, and other magazines. Her work has been a finalist for honors including the BOA Editions Short Fiction Prize, the Disquiet Literary Prize, and Sarabande Books Mary McCarthy Prize. She earned her BS and PhD at the University of California, Berkeley, and is a professor of mechanical engineering at Lafayette College. She throws right, bats left.

Nami Mun grew up in Seoul, South Korea and Bronx, New York. For her first book, Miles from Nowhere, she received several awards, including the Whiting Award, the Pushcart Prize, and the Chicago Public Library’s 21st Century Award, and was a finalist for the Orange Prize for New Writers and the Asian American Literary Award. Miles from Nowhere was on several "best of" lists, including Amazon, Indie Next, and Booklist. Chicago Magazine named her Best New Novelist of 2009. Her work can be found in publications, such as The New York Times, Granta, Tin House, The Iowa Review, and Tales of Two Americas, an anthology of essays, poems, and stories about inequality in America. She currently lives in Chicago.

The Place You're Supposed To Laugh (Paperback)