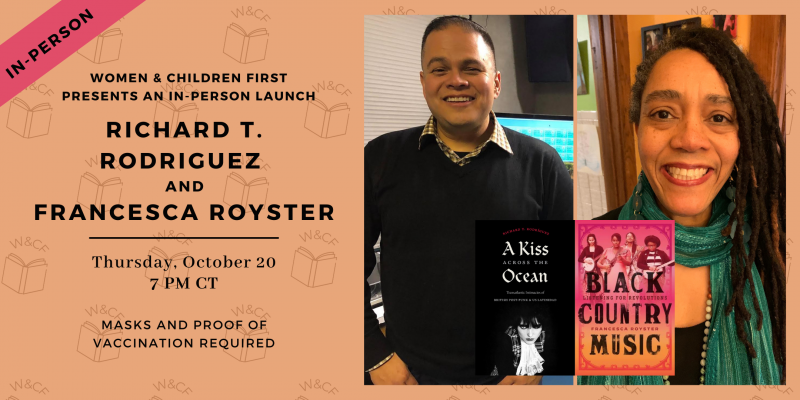 Join us for an in-person joint book launch celebration in honor of A Kiss Across the Ocean: Transatlantic Intimacies of British Post-Punk and US Latinidad by Richard T. Rodriguez and Black Country Music: Listening for Revolutions by Francesca T. Royster!

Please note: Pre-registration for this event is required. By pre-registering, you are verifying that you are fully vaccinated and will wear a mask throughout the entirety of the event.

REGISTER FOR THIS EVENT HERE!

In A Kiss Across the Ocean Richard T. Rodriguez examines the relationship between British post-punk musicians and their Latinx audiences in the United States since the 1980s. Melding memoir with cultural criticism, Rodriguez spotlights a host of influential bands and performers including Siouxsie and the Banshees, Adam Ant, Bauhaus, Soft Cell, Frankie Goes to Hollywood, and Pet Shop Boys. He recounts these bands' importance for him and other Latinx kids and discusses their frequent identification with these bands' glamorous performance of difference. Whether it was Siouxsie Sioux drawing inspiration from Latinx contemporaries and cultural practices or how Soft Cell singer Marc Almond's lyrics were attuned to the vibrancy of queer Latinidad, Rodriguez shows how Latinx culture helped shape British post-punk. He traces the fandom networks that link these groups across space and time to illuminate how popular music establishes and facilitates intimate relations across the Atlantic. In so doing, he demonstrates how the music and styles that have come to define the 1980s hold significant sway over younger generations equally enthused by their matchlessly pleasurable and political reverberations.

After a century of racist whitewashing, country music is finally reckoning with its relationship to Black people. In this timely work—the first book on Black country music by a Black writer—Francesca Royster uncovers the Black performers and fans, including herself, who are exploring the pleasures and possibilities of the genre.

Informed by queer theory and Black feminist scholarship, Royster’s book elucidates the roots of the current moment found in records like Tina Turner’s first solo album, Tina Turns the Country On! She reckons with Black “bros” Charley Pride and Darius Rucker, then chases ghosts into the future with Valerie June. Indeed, it is the imagination of Royster and her artists that make this music so exciting for a genre that has long been obsessed with the past. The futures conjured by June and others can be melancholy, and are not free of racism, but by centering Black folk Royster begins to understand what her daughter hears in the banjo music of Our Native Daughters and the trap beat of Lil Nas X’s “Old Town Road.” A Black person claiming country music may still feel a bit like a queer person coming out, but, collectively, Black artists and fans are changing what country music looks and sounds like—and who gets to love it.

Richard T. Rodríguez is a Professor of English and Media and Cultural Studies at the University of California, Riverside. He is the author of Next of Kin: The Family in Chicano/a Cultural Politics (2009) and A Kiss Across the Ocean: Transatlantic Intimacies of British Post-Punk and U.S. Latinidad (2022), both published by Duke University Press. He is currently finishing a book of poems about his time living in Chicago.

Francesca T. Royster is Professor of English at DePaul University in Chicago, and received her PhD from University of California, Berkeley in English Literature. She is the author of the books Sounding Like a No-No: Queer Sounds and Eccentric Acts in the Post-Soul Era (University of Michigan Press, 2013), and Becoming Cleopatra: The Shifting Image of an Icon (Palgrave MacMillan, 2003); two forthcoming books: Black Country Music: Listening for Revolution (University of Texas Press, October 2022) and Choosing Family: A Memoir of Queer Motherhood and Black Resistance (Abrams Books, February 2023); and numerous scholarly and creative essays.

Email wcfbooks@gmail.com with questions or to request accommodations.

A Kiss Across the Ocean: Transatlantic Intimacies of British Post-Punk and Us Latinidad (Paperback)