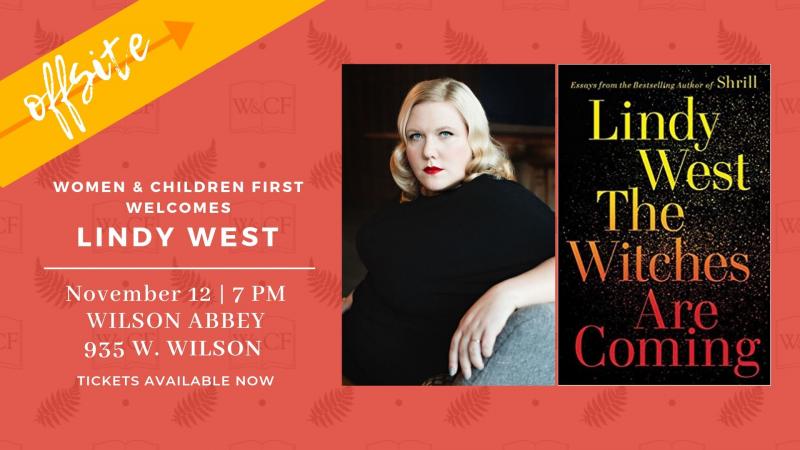 Women & Children First is honored to host Lindy West for a reading, audience Q&A, and book signing for her highly anticipated essay collection, THE WITCHES ARE COMING.

This event will be held in the auditorium at WILSON ABBEY (935 W. Wilson Ave.). Each ticket includes a copy of the book, which attendees will pick up at the event.

"We're witches, and we're hunting you."

Firebrand NY Times columnist and author of the critically acclaimed bestseller Shrill, which is currently in production as a Hulu series, Lindy West provides a brilliant and incisive cultural critique that helps explain how patriarchy, intolerance, and misogyny are still alive and well.

The conditions that fostered the catastrophic resentment and abetted Trump's victory did not spring up in a vacuum; they are woven into America's DNA. THE WITCHES ARE COMING will explore how we got here through a long lens of pop culture, dissecting the stories we've been telling ourselves about ourselves (and each other) for generations, the assumptions we swallow as fact and the facts we deny, and the disastrous death-grip of mediocre white men on our past century's art and media.

Perhaps more importantly, The Witches Are Coming examines what comes next, as the chickens come home to roost and cultural reckonings like #MeToo grow in power and scope. If the left's loathing of George W. Bush energized us to fight for and ultimately elect Barack Obama, what kind of political revolution might Trump engender? We can only see glimpses so far (the blue wave in local elections, the toppling of male predators thought too powerful to touch), but the momentum is undeniable. From the earliest moments of #MeToo, we've heard, over and over, a familiar counterpoint: this is feminism gone too far, this is injustice, this is a witch hunt. The Witches Are Coming turns that refrain on its head. Fine, if you insist. This is a witch hunt. We're witches, and we're hunting you.

Shrill has sold more than 90,000 copies combined in hardcover, trade paper, and ebook. Since publication, Lindy has become a NY Times columnist. Her columns earns an enormous number of comments and usually rank among the "most popular." She is also an influencer who has been profiled or interviewed on Fresh Air and This American Life, in Vogue, and in The Globe and Mail. Shrill made a number of "best of 2016" lists, with glowing reviews from NYTBR, Washington Post, NPR, People, Esquire, and many other outlets.

Lindy West is a contributing opinion writer for The New York Times. She is the author of Shrill, a memoir, which was adapted into a Hulu series starring Aidy Bryant. Her essays on feminism, social justice, body image and popular culture have been featured in Jezebel, Cosmopolitan, GQ, and on This American Life. From 2014 to 2017 she wrote a weekly political column for The Guardian. She  is also the founder of I Believe You/It's Not Your Fault, an advice blog for teenagers, as well as the reproductive rights destigmatization campaign #ShoutYourAbortion. She lives in Seattle.

Tickets are non-refundable. If you purchase a ticket and then do not attend the event, you will have 30 days to pick up your copy of THE WITCHES ARE COMING at Women & Children First (5233 N. Clark St.)

The Witches Are Coming (Hardcover)