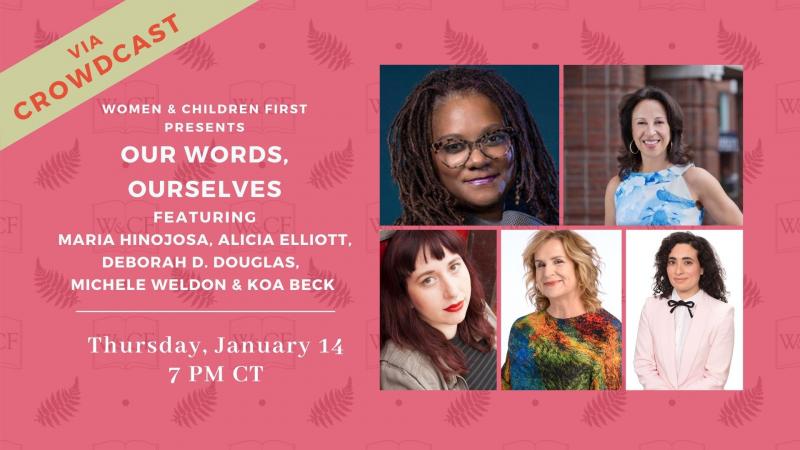 Join us for "Our Words, Ourselves" a virtual conversation featuring Maria Hinojosa, Alicia Elliott, Deborah D. Douglas, and Koa Beck in a conversation moderated by Michele Weldon.

This free event will be hosted on Women & Children First's Crowdcast Channel.

Maria Hinojosa dreamt of a space where she could create independent, multimedia journalism that explores and gives a critical voice to the diverse American experience. She made that dream a reality in 2010 when she created Futuro Media, an independent, nonprofit newsroom based in Harlem, NYC with the mission to create multimedia content from a POC perspective. As Anchor and Executive Producer of the Peabody Award-winning show Latino USA, distributed by PRX, and Co-Host of Futuro Media’s award-winning political podcast In The Thick, Hinojosa has informed millions about the changing cultural and political landscape in America and abroad.

Alicia Elliott is a Mohawk writer living in Brantford, Ontario. She has written for The Globe and Mail, CBC, Hazlitt and many others. She’s had essays nominated for National Magazine Awards for three straight years, winning Gold in 2017, and her short fiction was selected for Best American Short Stories 2018, Best Canadian Stories 2018, and Journey Prize Stories 30. She was chosen by Tanya Talaga as the 2018 recipient of the RBC Taylor Emerging Writer Award. Her first book, A Mind Spread Out On The Ground, is a national bestseller.

Deborah D. Douglas is the Eugene S. Pulliam Distinguished Visiting Professor of Journalism at DePauw University and a senior leader with The OpEd Project, leading fellowships and programs that include the University of Texas at Austin, Dartmouth College, Columbia University, Urgent Action Fund in South Africa and Kenya, and Youth Narrating Our World (YNOW). While teaching at her alma mater, Northwestern University’s Medill School, she created a graduate investigative journalism capstone on the Civil Rights Act of 1964 and taught best practices in Karachi, Pakistan. The first managing editor of MLK50: Justice Through Journalism, Douglas is author of U.S. Civil Rights Trail: A Traveler’s Guide to the People, Places and Events That Made the Movement.

Koa Beck is the former editor-in-chief of Jezebel. Previously, she was the executive editor at Vogue and cohost of “The #MeToo Memos” on WNYC’s The Takeaway. Her writing has appeared in The Atlantic, The New York Observer, The Guardian, and Esquire, among others. For her reporting prowess, she has been interviewed by the BBC and has appeared on many panels about gender and identity at the Harvard Kennedy School at Harvard University, the Metropolitan Museum of Art, the Brooklyn Historical Society, and Columbia Journalism School to name a few. She lives in Los Angeles.

Michele Weldon is an author, journalist and emerita faculty in journalism at Northwestern University, where she taught on the undergraduate and graduate levels for 18 years. She is the author of six nonfiction books, including her latest, Act Like You’re Having A Good Time: Essays, She has contributed chapters in seven other books.  Her essays have appeared in New York Times, CNN, Washington Post, TIME, OZY, The Guardian, Slate, Chicago Tribune, Better, Forbes, USA Today, NBC Think, Narratively, Cosmopolitan and scores more. She has delivered more than 200 keynotes and appeared on TV, radio and digital outlets globally. A senior leader with The OpEd Project since 2011, she has led Public Voices Fellowship initiatives at Northwestern, Stanford, Princeton, Brown, Loyola, DePaul and Rush universities, the Ms. Foundation, the McCormick Foundation, Boone Family Foundation, Center for Global Policy Solutions and Urgent Fund Africa.

Once I Was You: A Memoir of Love and Hate in a Torn America (Hardcover)

A Mind Spread Out on the Ground (Paperback)

White Feminism: From the Suffragettes to Influencers and Who They Leave Behind (Hardcover)

Moon U.S. Civil Rights Trail: A Traveler's Guide to the People, Places, and Events that Made the Movement (Travel Guide) (Paperback)

Act Like You're Having a Good Time: Essays (Paperback)