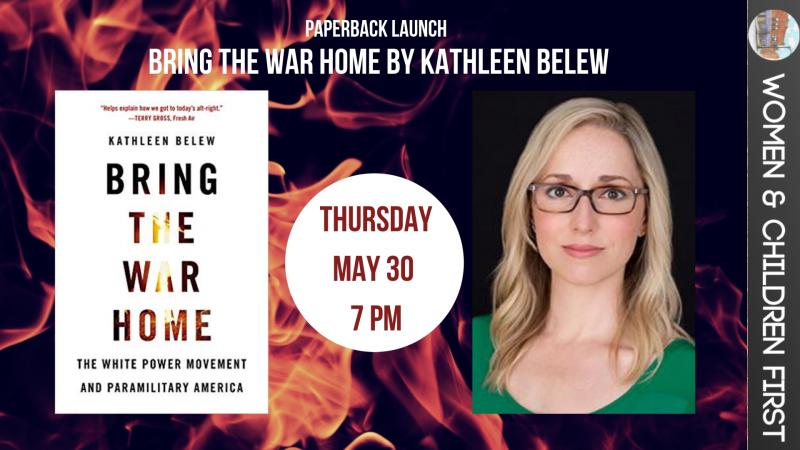 Join us as welcome Kathleen Belew for the paperback launch of her critically acclaimed book, Bring the War Home. For this event, Kathleen will be in conversation with Mark Bazer.

Belew specializes in the recent history of the United States, examining the long aftermath of war. Her first book, Bring the War Home: The White Power Movement and Paramilitary America explores how white power activists wrought a social movement through a common story about the Vietnam War and its weapons, uniforms, and technologies. She charts how the movement’s escalating acts of violence have ricocheted through Latin America, southern Africa, and the United States. This account connects the overtly racist organizing of the 1980s with the militia movement, culminating in the 1995 Oklahoma City bombing and beyond.

Kathleen Belew’s research has received the support of the Andrew W. Mellon and Jacob K. Javits Foundations, as well as an Albert J. Beveridge and John F. Enders grants for research in Mexico and Nicaragua. She earned her AB in the comparative history of ideas from the University of Washington in 2005, where she was named Dean’s Medalist in the Humanities. Her MPhil (2008) and PhD (2011) in American studies are from Yale University. She is currently a professor at the University of Chicago.

Mark Bazer hosts The Interview Show, a talk show on WTTW, Chicago's PBS station, and available as a podcast, available on iTunes, Google Play and elsewhere. He is also a contributing writer for Chicago magazine.