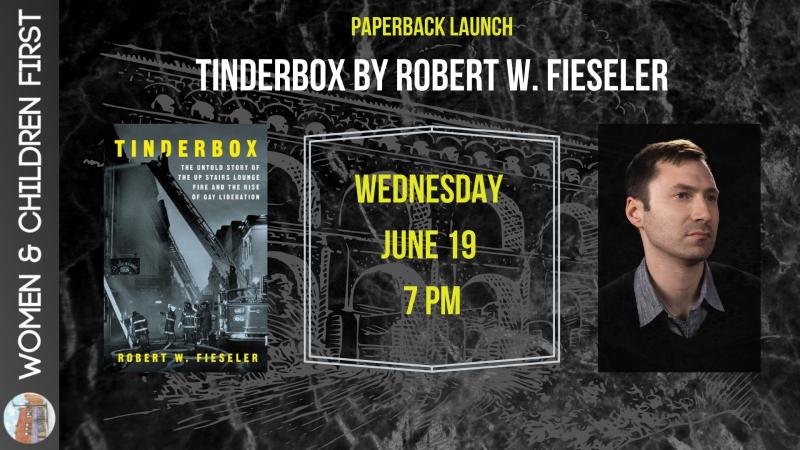 Join us for a reading, Q&A, and book signing with Robert W. Fieseler in honor of the paperback release of TINDERBOX. For this event, Robert will be in conversation with author Owen Keehnen.
An essential work of American civil rights history, Robert W. Fieseler's Tinderbox reconstructs the 1973 fire that devastated New Orleans’ subterranean gay community. Buried for decades, the Up Stairs Lounge tragedy has only recently emerged as a catalyzing event of the gay liberation movement. In revelatory detail, Fieseler chronicles the tragic event that claimed the lives of thirty-one men and one woman on June 24, 1973, at a New Orleans bar, the largest mass murder of gays until 2016. Relying on unprecedented access to survivors and archives, Fieseler creates an indelible portrait of a closeted, blue-collar gay world that flourished before an arsonist ignited an inferno that destroyed an entire community. The aftermath was no less traumatic—families ashamed to claim loved ones, the Catholic Church refusing proper burial rights, the city impervious to the survivors’ needs—revealing a world of toxic prejudice that thrived well past Stonewall. Yet the impassioned activism that followed proved essential to the emergence of a fledgling gay movement. Tinderbox restores honor to a forgotten generation of civil-rights martyrs.
Robert W. Fieseler is the acclaimed debut author of Tinderbox: The Untold Story of the Up Stairs Lounge Fire and the Rise of Gay Liberation – winner of the 2019 Edgar Award in Best Fact Crime and finalist for the Randy Shilts Award for Gay Nonfiction. Fieseler graduated co-valedictorian from the Columbia University Graduate School of Journalism and is a recipient of the Pulitzer Traveling Fellowship. A proud gay American, he married his longtime partner at Walden Pond and currently resides in New Orleans.
Owen Keehnen is a grassroots historian and the author of several fiction and non-fiction titles, including the recent release Dugan’s Bistro and the Legend of the Bearded Lady. He is the co-founder of the Legacy Project, a history/education organization focused on reclaiming and celebrating the LGBTQ past. He was inducted into the Chicago LGBT  Hall of Fame in 2011.
Event date:
Wednesday, June 19, 2019 - 7:00pm
Event address:
Women & Children First
5233 N. Clark St.
Chicago, IL 60640

Tinderbox: The Untold Story of the Up Stairs Lounge Fire and the Rise of Gay Liberation (Paperback)