In-person Book Signing: Amira & Hamza: The War to Save the Worlds by Samira Ahmed 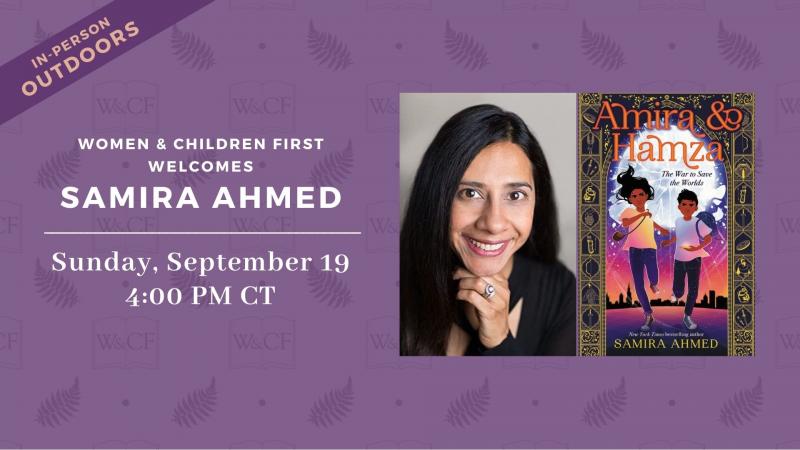 Join us for an outdoor book-signing celebrating Amira & Hamza: The War to Save the Worlds by Samira Ahmed!

On the day of a rare super blue blood moon eclipse, twelve-year-old Amira and her little brother, Hamza, can’t stop their bickering while attending a special exhibit on medieval Islamic astronomy. While stargazer Amira is wowed by the amazing gadgets, a bored Hamza wanders off, stumbling across the mesmerizing and forbidden Box of the Moon. Amira can only watch in horror as Hamza grabs the defunct box and it springs to life, setting off a series of events that could shatter their world—literally.

Suddenly, day turns to night, everyone around Amira and Hamza falls under a sleep spell, and a chunk of the moon breaks off, hurtling toward them at lightning speed, as they come face-to-face with two otherworldly creatures: jinn.

The jinn reveal that the siblings have a role to play in an ancient prophecy. Together, they must journey to the mystical land of Qaf, battle a great evil, and end a civil war to prevent the moon—the stopper between realms—from breaking apart and unleashing terrifying jinn, devs, and ghuls onto earth. Or they might have to say goodbye to their parents and life as they know it, forever.…

Samira Ahmed is the New York Times bestselling author of Love, Hate, & Other Filters and Internment. She was born in Bombay, India, and has lived in New York, Chicago, and Kauai, where she spent a year searching for the perfect mango. She currently resides in the Midwest. Find her online at samiraahmed.com and on Twitter and Instagram @sam_aye_ahm.

Amira & Hamza: The War to Save the Worlds (Hardcover)