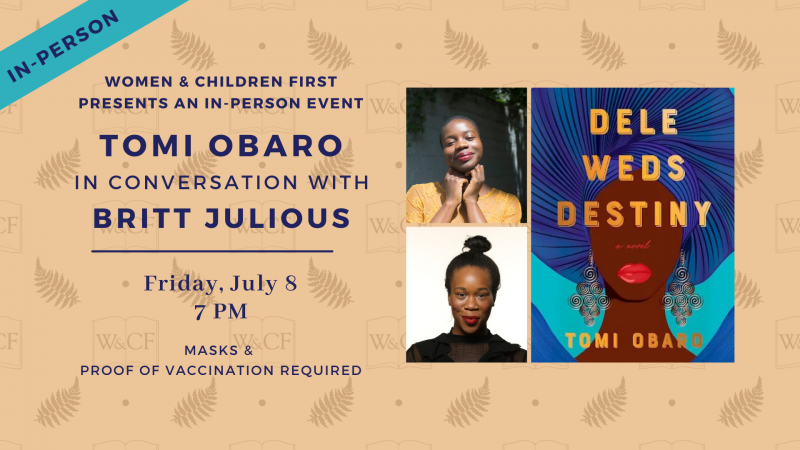 Join us in-person for an author reading, conversation, and book-signing in honor of Dele Weds Destiny by Tomi Obaro! For this event, Obaro will be in conversation with Britt Julious.

Funmi, Enitan, and Zainab first meet at university in Nigeria and become friends for life despite their differences. Funmi is beautiful, brash, and determined; Enitan is homely and eager, seeking escape from her single mother's smothering and needy love; Zainab is elegant and reserved, raised by her father's first two wives after her mother's death in childbirth. Their friendship is complicated but enduring, and over the course of the novel, the reader learns about their loves and losses. How Funmi stole Zainab's boyfriend and became pregnant, only to have an abortion and lose the boyfriend to police violence. How Enitan was seduced by an American Peace Corps volunteer, the only one who ever really saw her, but is culturally so different from him—a Connecticut WASP—that raising their daughter together put them at odds. How Zainab fell in love with her teacher, a friend of her father’s, and ruptured her relationship with her father to have him.

Now, some thirty years later, the three women are reunited for the first time, in Lagos. The occasion: Funmi’s daughter, Destiny, is getting married. Enitan brings her American daughter, Remi. Zainab travels by bus, nervously leaving her ailing husband in the care of their son. Funmi, hosting the weekend with her wealthy husband, wants everything to go perfectly. But as the big day approaches, it becomes clear that something is not right. As the novel builds powerfully, the complexities of the mothers’ friendship—and the private wisdom each has earned—come to bear on a riveting, heartrending moment of decision. Dele Weds Destiny is a sensational debut from a dazzling new voice in contemporary fiction.

Tomi Obaro is a senior culture editor at BuzzFeed News whose cultural criticism and essays have been published in BuzzFeed News, The Morning News, and The Toast. She lives in Brooklyn.

Britt Julious is a writer of many genres, an editor, and a storyteller. She is currently the music critic for the Chicago Tribune and serves as the director of content for a new wellness startup. As a freelance writer, Britt regularly contributes to publications including The New York Times, Vogue, Harper’s Bazaar, ELLE, Esquire, Vice, The Guardian, and others. Her essays have appeared in books like American Subcultures from Bedford/St. Martin’s, Rust Belt Chicago from BELT Publishing, and On Balance from TigerBee Press. Britt’s work focuses on the intersection of art, culture, race, feminism, and politics, and she is a firm believer in the underground, the avant-garde, and the underdog. In 2019, Britt won the Studs Terkel award in journalism for her work spotlighting underserved communities.