In-person Event: EVERYTHING FOR EVERYONE by M. E. O'Brien & Eman Abdelhadi 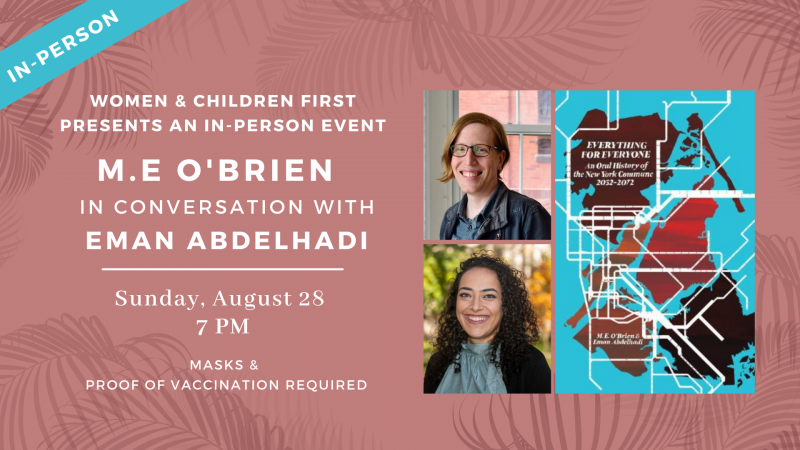 Join us in-person for an author reading, conversation, and book-signing in honor of Everything for Everyone: An Oral History of the New York Commune, 2052-2072 by M. E. O'Brien & Eman Abdelhadi!

Please note: all in-person events held at Women & Children FIrst require masks and proof of vaccination. This event will be recorded and uploaded to our YouTube Channel following the event.

By the middle of the twenty-first century, war, famine, economic collapse, and climate catastrophe had toppled the world's governments. In the 2050s, the insurrections reached the nerve center of global capitalism--New York City. This book, a collection of interviews with the people who made the revolution, was published to mark the twentieth anniversary of the New York Commune, a radically new social order forged in the ashes of capitalist collapse.

Here is the insurrection in the words of the people who made it, a cast as diverse as the city itself. Nurses, sex workers, antifascist militants, and survivors of all stripes recall the collapse of life as they knew it and the emergence of a collective alternative. Their stories, delivered in deeply human fashion, together outline how ordinary people's efforts to survive in the face of crisis contain the seeds of a new world.

M. E. O'Brien writes and speaks on gender freedom and capitalism. She co-edits two magazines, Pinko, on gay communism, and Parapraxis, on psychoanalytic theory and politics. Her work on family abolition has been translated into Chinese, German, Greek, French, Spanish, and Turkish. Previously, she coordinated the New York City Trans Oral History Project, and worked in HIV and AIDS activism and services. She completed a PhD at NYU, where she wrote on how capitalism shaped New York City LGBTQ social movements. You can support her writing through patreon.com/meobrien, and find her on twitter @genderhorizon. Everything for Everyone: An Oral History of the New York Commune, 2052–2072 is her first book.

Eman Abdelhadi is an academic, activist, and artist who writes and thinks at the intersection of identity, politics, sexuality, and gender. Her academic work has been published in numerous peer-reviewed journal and covered by press outlets such as the Washington Post, Associated Press, and NPR. She is co-author of Everything for Everyone, An Oral History of the New York Commune 2052-2072--a novel published with Common Notions Press in 2022, and her poetry and essays have appeared in numerous outlets. She received her PhD in Sociology from New York University in 2019 and is currently an assistant professor at the University of Chicago. You can follow her work on Twitter: @emanabdelhadi.

Image description: a mauve rectangular banner featuring the book cover for Everything for Everyone: An Oral History of the New York Commune, 2052-2072 , which features a bright blue background with an abstract design in white, brown, and red that resembles a train station map. Beside the cover image are photographs of authors M.E. O'Brien and Eman Abdelhadi. Text reads: Women & Children First presents an in-person event M.E. O'Brien in conversation with Eman Abdelhadi, Sunday, August 28 at 7 P.M. CT, masks and proof of vaccination required.

Everything for Everyone: An Oral History of the New York Commune, 2052-2072 (Paperback)