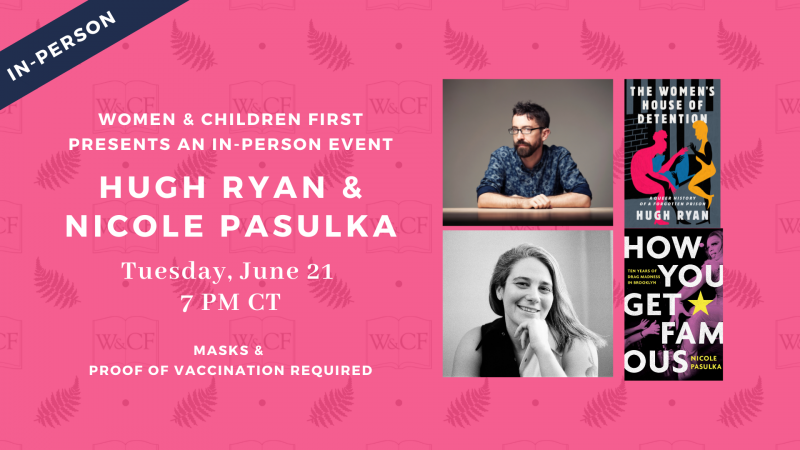 Join us in-person for a joint author reading, conversation, and book-signing in honor of two new releases: The Women's House of Detention: A Queer History of a Forgotten Prison by Hugh Ryan and How You Get Famous: Ten Years of Drag Madness in Brooklyn by Nicole Pasulka!

Please note: all in-person events held at Women & Children FIrst require masks and proof of vaccination. We record our events and upload them to our YouTube Channel after the event.

REGISTER FOR THE EVENT

ABOUT The Women's House of Detention: A Queer History of a Forgotten Prison

The Women’s House of Detention, a landmark that ushered in the modern era of women’s imprisonment, is now largely forgotten. But when it stood in New York City’s Greenwich Village, from 1929 to 1974, it was a nexus for the tens of thousands of women, transgender men, and gender-nonconforming people who inhabited its crowded cells. Some of these inmates—Angela Davis, Andrea Dworkin, Afeni Shakur—were famous, but the vast majority were incarcerated for the crimes of being poor and improperly feminine. Today, approximately 40 percent of the people in women’s prisons identify as queer; in earlier decades, that percentage was almost certainly higher.

Historian Hugh Ryan explores the roots of this crisis and reconstructs the little-known lives of incarcerated New Yorkers, making a uniquely queer case for prison abolition—and demonstrating that by queering the Village, the House of D helped defined queerness for the rest of America. From the lesbian communities forged through the Women’s House of Detention to the turbulent prison riots that presaged Stonewall, this is the story of one building and much more: the people it caged, the neighborhood it changed, and the resistance it inspired.

Hugh Ryan is a writer and curator. His first book, When Brooklyn Was Queer, won a 2020 New York City Book Award, was a New York Times Editors’ Choice in 2019, and was a finalist for the Randy Shilts and Lambda Literary Awards. He was honored with the 2020 Allan Bérubé Prize from the American Historical Association. In 2019–2021, he worked on the Hidden Voices: LGBTQ+ Stories in United States History curricular materials for the NYC Department of Education.

ABOUT How You Get Famous

Ten years ago, an aimless coat check girl better known today as Merrie Cherry sweet-talked her boss into giving her $100 to host a drag show at a Brooklyn dive bar. Soon, kids like Aja were kicking their way into the scene, sneaking into clubs, pocketing their tips to help mom pay the mortgage, and sharing the stage with electric performers like Thorgy Thor and Sasha Velour. Because suddenly, in the biggest, brightest city in America, drag was offering young, broke, creative queer people a chance at real money—and for thousands or even millions of people to learn their names.

In How You Get Famous, journalist Nicole Pasulka joyfully documents the rebirth of the New York drag scene, following a group of iconoclastic performers with undeniable charisma, talent, and a hell of a lot to prove. The result is a sweeping portrait of the 21st-century search for celebrity and community, as well as a chronicle of all the struggles, fights, and disappointments along the way. A rollicking account of the quest to make a living through an art form on the cusp of becoming a cultural phenomenon, How You Get Famous offers an unmissable romp through the gritty and glamorous world of Brooklyn drag.

Nicole Pasulka writes about gender, activism, and criminal justice for publications such as New York, Harper’s, Mother Jones, VICE, and The Believer. The recipient of numerous prestigious fellowships, her writing has been anthologized in the Best American series and featured on NPR’s All Things Considered. How You Get Famous is her first book.

The Women's House of Detention: A Queer History of a Forgotten Prison (Hardcover)

How You Get Famous: Ten Years of Drag Madness in Brooklyn (Hardcover)