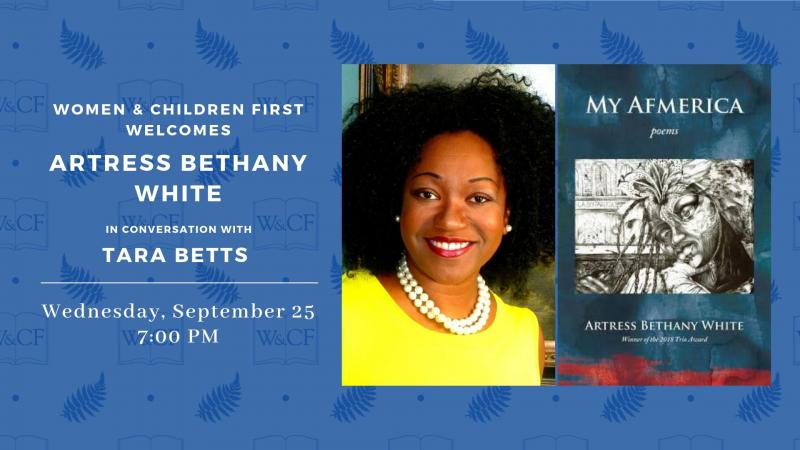 "My Afmerica is a restless book, wandering through an America that cannot be separated from its African American people, where to be black is to be considered a body potent with the crimes of treason, with the crime of not being pure/white, traceable longer back 'than Whitman's leaves of grass.' "신 선 영 Sun Yung Shin, author of Rough, and Savage and 2018 Trio House Press Contest Judge

Artress Bethany White is a poet, essayist, and literary critic. She is the recipient of the 2018 Trio Award for her poetry collection, My Afmerica (Trio House Press, 2019). Her prose and poetry have appeared in such journals as Harvard Review, Tupelo Quarterly, The Hopkins Review, Pleiades, Solstice, Poet Lore, Ecotone, and The Account. Her collection of essays, Survivor's Guilt: Essays on Race and American Identity is forthcoming from New Rivers Press/Minnesota State University in March 2020.

Tara Betts is the author of three poetry collections Break the Habit, Arc & Hue, and the forthcoming Refuse to Disappear. She co-edited The Beiging of America: Personal Essays About Being Mixed Race in the 21st Century and edited a new critical edition of Adventures in Black and White, the long out-of-print memoir by Harlem-born, interracial child prodigy Philippa Duke Schuyler. She holds an MFA from New England College and a Ph.D. in English from Binghamton University. Her work has appeared in numerous journals and anthologies, including Poetry, Essence, and NYLON. Dr. Betts currently works with students at ChiArts High School, Chicago State University, and participants in the Prison + Neighborhood Arts Project at Stateville Prison.