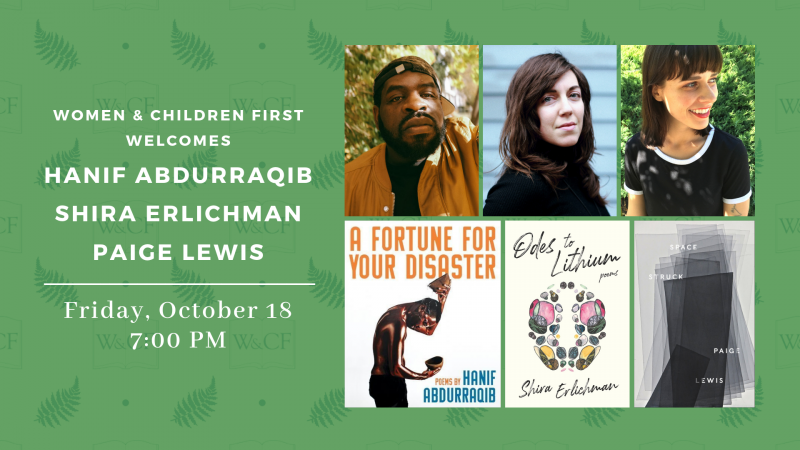 Please join us for a reading celebrating new poetry collections by Hanif Abdurraqib (A Fortune for Your Disaster), Shira Erlichman (Odes to Lithium), and Paige Lewis (Space Struck).

Hanif Abdurraqib is a poet, essayist, and cultural critic from Columbus, Ohio. His poetry has been published in Muzzle, Vinyl, PEN American, and various other journals. His essays and music criticism have been published in The FADER, Pitchfork, The New Yorker, and The New York Times. His first full length poetry collection, The Crown Ain't Worth Much, was released in June 2016 from Button Poetry. It was named a finalist for the Eric Hoffer Book Prize, and was nominated for a Hurston-Wright Legacy Award. With Big Lucks, he released a limited edition chapbook, Vintage Sadness, in summer 2017 (you cannot get it anymore and he is very sorry.) His first collection of essays, They Can't Kill Us Until They Kill Us, was released in winter 2017 by Two Dollar Radio and was named a book of the year by Buzzfeed, Esquire, NPR, Oprah Magazine, Paste, CBC, The Los Angeles Review, Pitchfork, and The Chicago Tribune, among others. He released Go Ahead In The Rain: Notes To A Tribe Called Quest with University of Texas press in February 2019. The book became a New York Times Bestseller, and was met with critical acclaim. His second collection of poems, A Fortune For Your Disaster, is being released by Tin House Books in September 2019.

Shira Erlichman is a poet, musician, and visual artist. She earned her BA at Hampshire College and has been awarded the James Merrill Fellowship by the Vermont Studio Center, the Visions of Wellbeing Focus Fellowship at AIR Serenbe, as well as a residency by the Millay Colony. She is the author and illustrator of the picture book Be/Hold. Born in Israel, raised in Massachusetts, she now lives in Brooklyn.

Paige Lewis is the author of Space Struck (Sarabande Books, 2019). Their poems have appeared in American Poetry Review, Ploughshares, The Georgia Review, Best New Poets 2017, and elsewhere. They currently teach at Purdue University and in the low-residency MFA program at Randolph college.

Our store is wheelchair accessible, however--there is a narrow hallway and sharp 90-degree turn on the way to our bathrooms. Seating is first-come, first-served, but we are happy to reserve seats for people with disabilities. Please call the store at 773-769-9299 the day of the event if you need a reserved seat or have additional questions.

A Fortune for Your Disaster (Paperback)