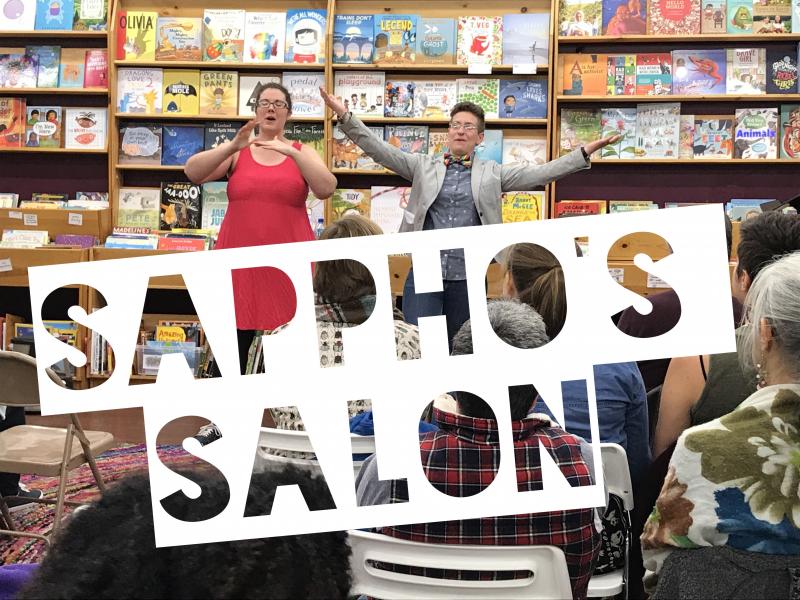 Sappho's Salon is a quarterly performance salon at Chicago's only feminist bookstore, featuring expressions of queerness, gender and feminism from featured and open mic performers. This event is hosted by Liz Baudler & Eileen Tull!

Doors open at 7, show starts roundabout 7:30 and ends roundabout 9:30. Snacks provided from the Middle Eastern Bakery. As always, this event is BYOB and Pay-What-You-Can. Admission benefits the performers and WCF's Women's Voices Fund. Open mic folks get a bookstore coupon!

Happy 2020! This year may feel like it's already been six months, but Sappho's Salon is kicking off our first show of the year with two amazing featured performers: poet and drag performer Trans Fat (aka Garnet Williams) and Nitty Gritty (aka Maggie Wagner): a burlesque take on everybody's favorite Philadelphia mascot. This sexy lineup will also include open mic performers (female, trans, and non-binary artists of any genre!).

Eileen Tull (she/hers) is a storyteller, writer, poet, comedian, and one-woman-show person. She has performed throughout the country, from San Francisco to New York City, including in the SF Fringe, New Seeds Festival, United Solo, the Cincy Fringe, the Minnesota Fringe Festival, and the Dallas Solo Festival. Her work has been seen all over Chicago in theatres, bookstores, art galleries, bars and other non-traditional spaces. Eileen is a drama instructor with the Chicago Park District, and her work as a creative activist was recognized by The White House in 2016.

Liz Baudler (she/they) is a recovering journalist and creative writer who currently just wants to live life quietly and emerge from under a rock every two months for Sappho's Salon like some sort of introverted nonbinary queer cicada.Their work has appeared in Windy City Times, and Newcity, among others, and they've performed widely as storyteller in Chicago. You can either find Liz at a museum or on their couch doing absolutely nothing: choose wisely.
Event date:
Monday, February 10, 2020 - 7:00pm to 9:30pm
Event address:
Women & Children First
5233 N. Clark St.
Chicago, IL 60640