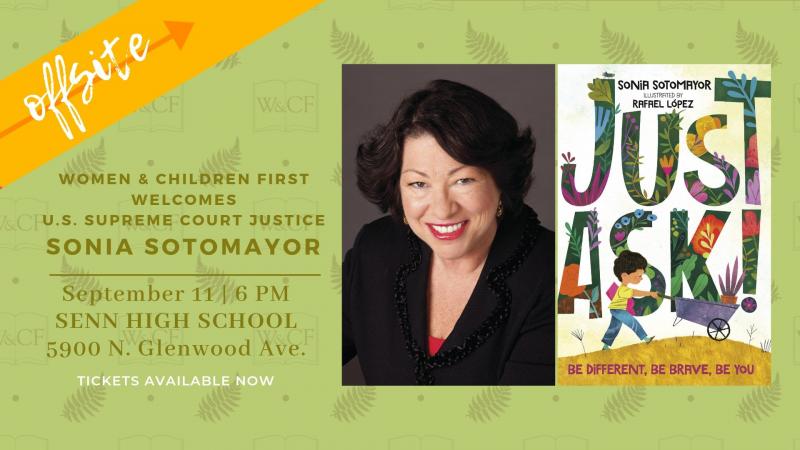 Women & Children First is honored to present U.S. Supreme Court Justice Sonia Sotomayor for a moderated conversation with Abby Mollen and audience Q&A followed by a book signing in celebration of her new children's book, Just Ask!: Be Different, Be Brave, Be You.

Attendees must have a copy of either Just Ask! or the Spanish edition Solo Pregunta, in order to enter the signing line. In addition to these new books, If you purchase a book with your ticket, you will pick it up at the event. Sonia Sotomayor will also sign any of her previous books. Copies of her books will be available for purchase at the event.

ABOUT JUST ASK! Be Different, Be Brave, Be You

Sonia Sotomayor and award-winning artist Rafael López create a kind and caring book about the differences that make each of us unique.

Feeling different, especially as a kid, can be tough. But in the same way that different types of plants and flowers make a garden more beautiful and enjoyable, different types of people make our world more vibrant and wonderful. In "Just Ask", Sonia Sotomayor celebrates the different abilities kids (and people of all ages) have. Using her own experience as a child who was diagnosed with diabetes, she writes about children with all sorts of challenges--and looks at the special powers those kids have as well. As the kids work together to build a community garden, asking questions of each other along the way, this book encourages readers to do the same: When we come across someone who is different from us but we're not sure why, all we have to do is Just Ask.

Sonia Sotomayor was born in the Bronx, New York. She earned a BA from Princeton University and a JD from Yale Law School. She served as Assistant District Attorney in New York County, and then as a litigator at Pavia & Harcourt. In 1991, President George H.W. Bush nominated her to the U.S. District Court, Southern District of New York. In 1997, President William Jefferson Clinton nominated her to the U.S. Court of Appeals for the Second Circuit. President Barack Obama nominated her as an Associate Justice of the Supreme Court of the United States on May 26, 2009, and she assumed this role August 8, 2009, becoming the first Latina to ever hold such a high position. She is the author of My Beloved World, Turning Pages, and The Beloved World of Sonia Sotomayor.

Abby is a partner at Bartlit Beck in Chicago, where she serves as trial counsel in high-stakes commercial matters before juries, judges, and arbitrators.  In addition to her practice at Bartlit Beck, Abby is a member of the faculty at Northwestern Pritzker School of Law, where she teaches courses in the separation of powers and complex litigation.  Abby graduated first in her class from Northwestern, and after law school, clerked for Judge David S. Tatel of the United States Court of Appeals for the District of Columbia Circuit and Justice Sonia Sotomayor of the United States Supreme Court.

Please note: No photos, video or audio recording are permitted during any part of this event, including the book signing.

Tickets are non-refundable. If you choose to purchase a copy of "Just Ask!" or "Solo Pregunta" with your ticket and cannot attend the event, you will have 30 days top pick up your book at Women & Children First (5233 N. Clark Street).